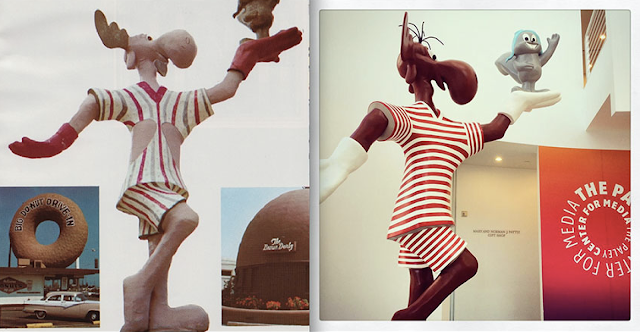 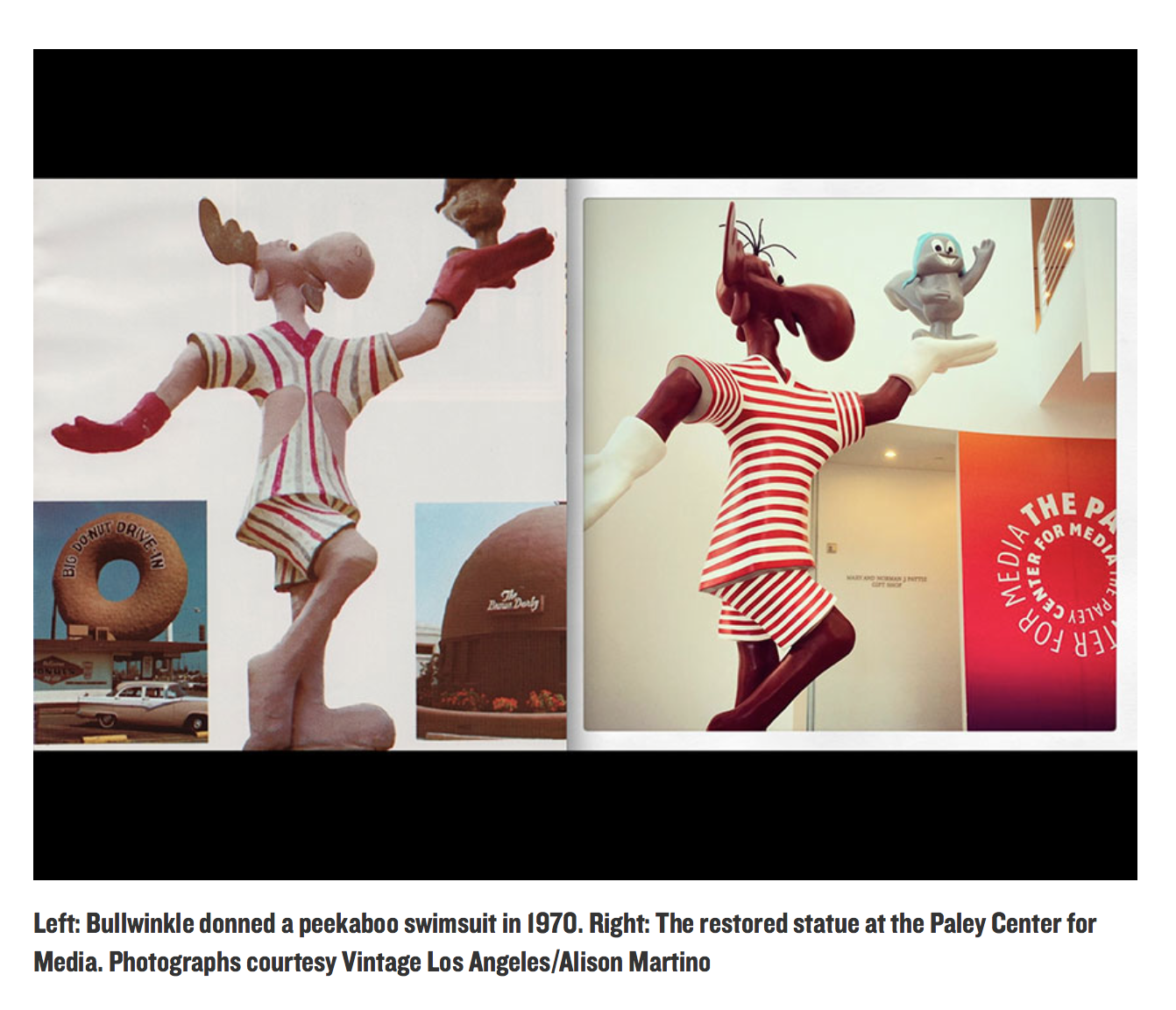 The Rocky and Bullwinkle statue was created by TV producer Jay Ward and placed in front of Jay Ward Animation Studios to poke fun at the showgirl on the other side of the street. 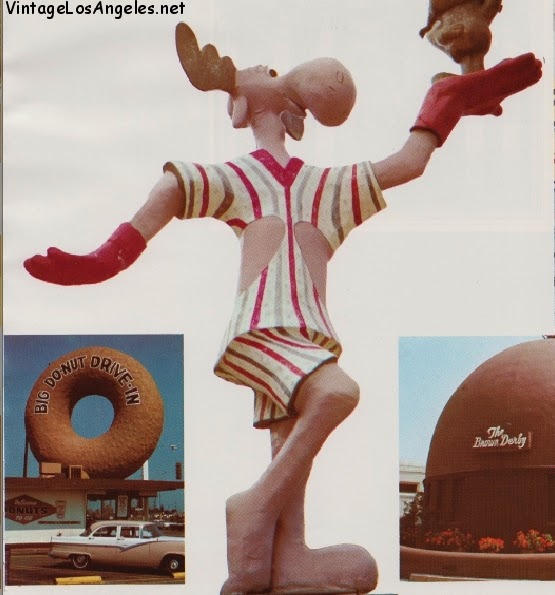 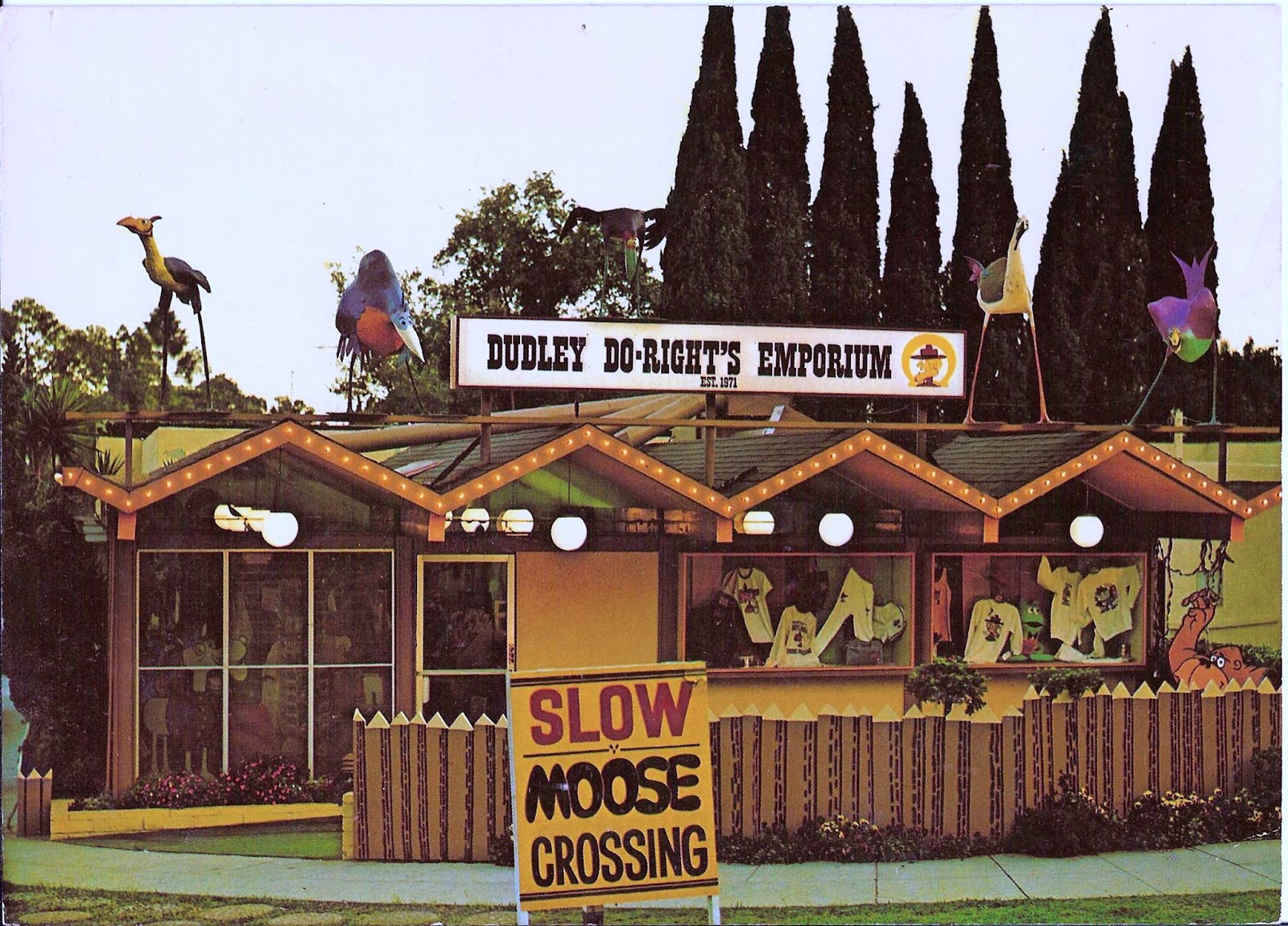 
(today this is Pinch’s Taco’s)

Over five decades, the statue became a symbol of the Sunset Strip. What else would you expect from the cartoon capitol of the world? 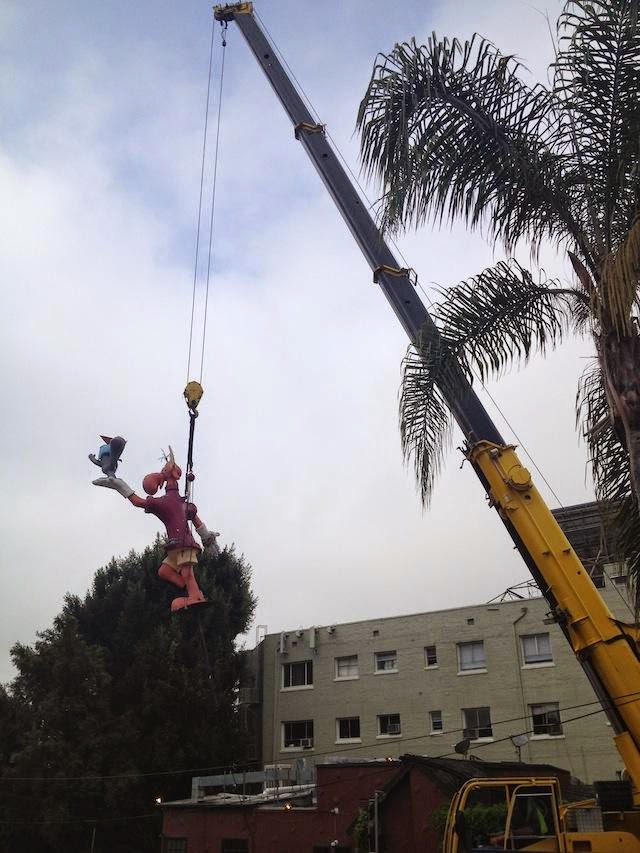 Last year I discovered Rocky and Bullwinkle had been mysteriously removed. On the morning of July 22, 2013, a video of the statue’s unceremonious removal landed in my inbox anonymously and without further explanation. All I could tell from the 10-second clip was that a crane had whisked Rocky and Bullwinkle away. Mysterious video here.

In the 15 months since, I’ve heard every depressing scenario possible from would-be sources, all of who agreed the statue was likely never be seen in public again. They were wrong. I’m thrilled to report that Rocky and Bullwinkle have been lovingly restored by Ricardo Scozzari of Burbank Furniture Restoration at the behest of the Ward family, and the statue is now at the Paley Center in Beverly Hills, where it will be on display through December. When I spoke with Scozzari recently about the local icon, he told me exclusively what it took to get the statue back in shape and the truth about its mysterious disappearance.

How did you get involved with the restoration?

I am a jack of all trades. I’ve been fortunate enough to know the Wards for many years, and they’ve relied on me for many facets of their legacy. I was a commercial illustrator and learned many other different trades, such welding and sculpting.

What condition was the statue in when you began the project?

When I took the statue back to Warner Brothers, my associates and I had to strip a layer of paper mache. It almost looked like it had a bad case of skin disorder. All that weathering had gone into the steel. Its original assembly wasn’t welded; there was steel and wood inside of the statue. 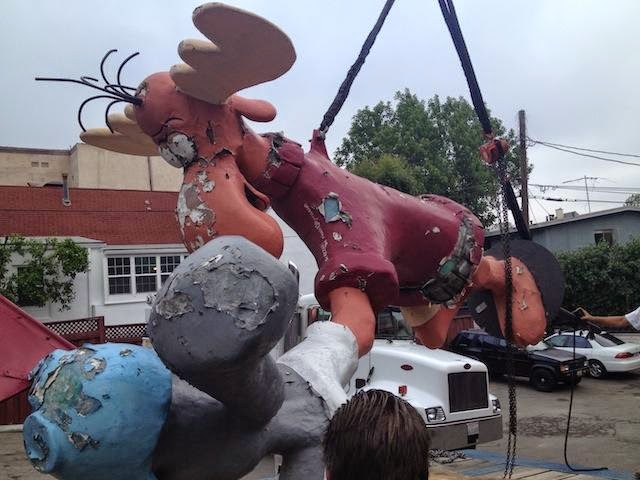 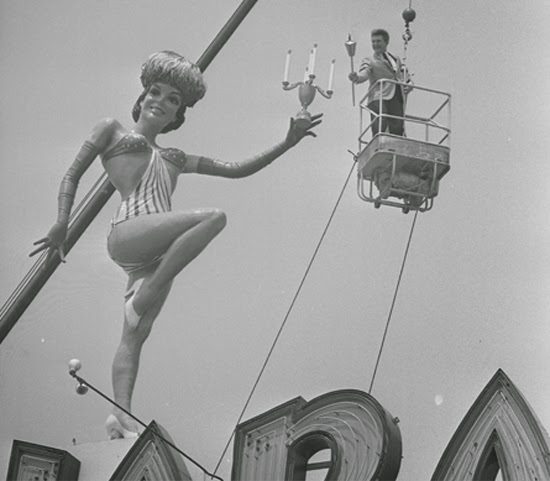 The cowgirl had a better chance of living longer! And yet, the moose lasted 53 years. But she was a commercial billboard. The Bullwinkle statue was part of the studio. I think the cowgirl was removed because her contract was up. She was replaced by the Marlboro Man billboard. 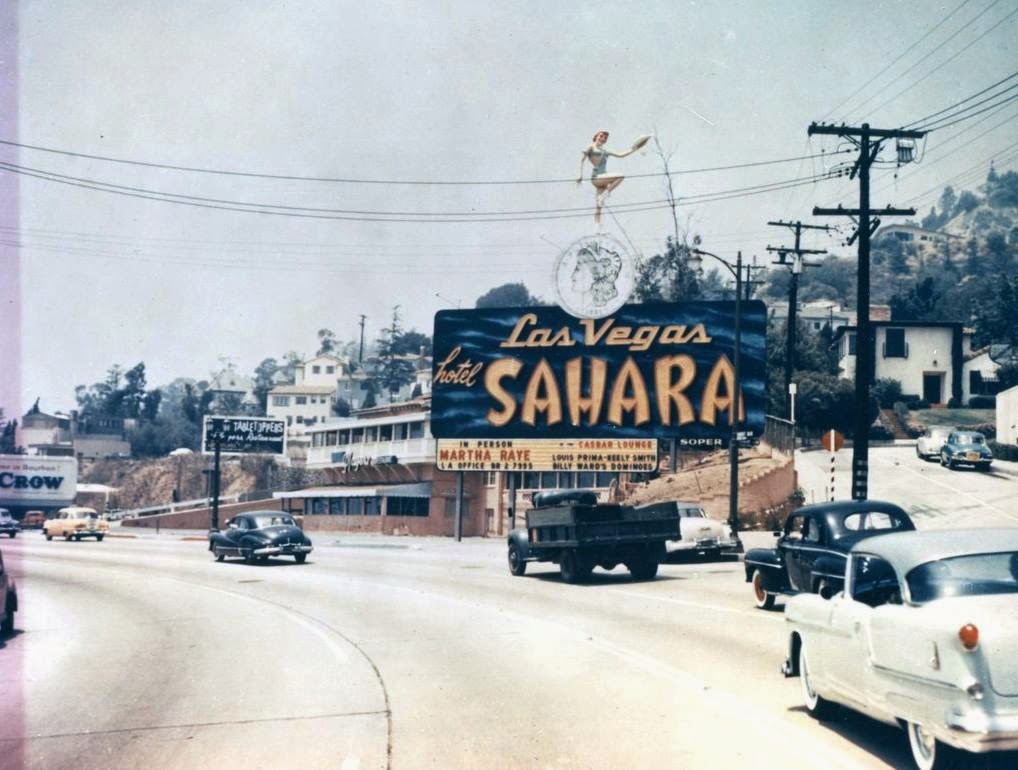 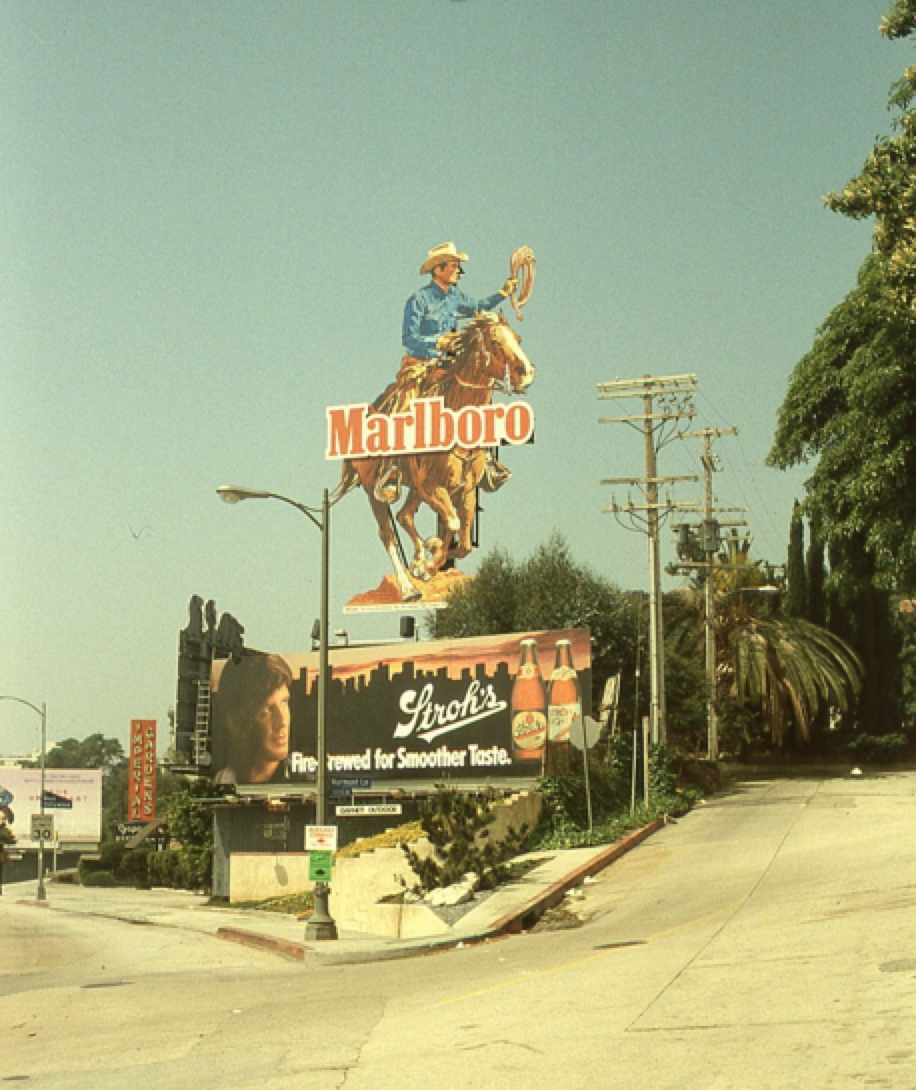 Was the statue in fact created to promote the premiere of the cartoon?

Yes. It was initially created for the opening of the “The Bullwinkle Show” in 1961. It was a hyped PR thing. Jayne Mansfield was at the opening. They had a band and lots of people. The show was premiering on NBC, and it was a big deal. 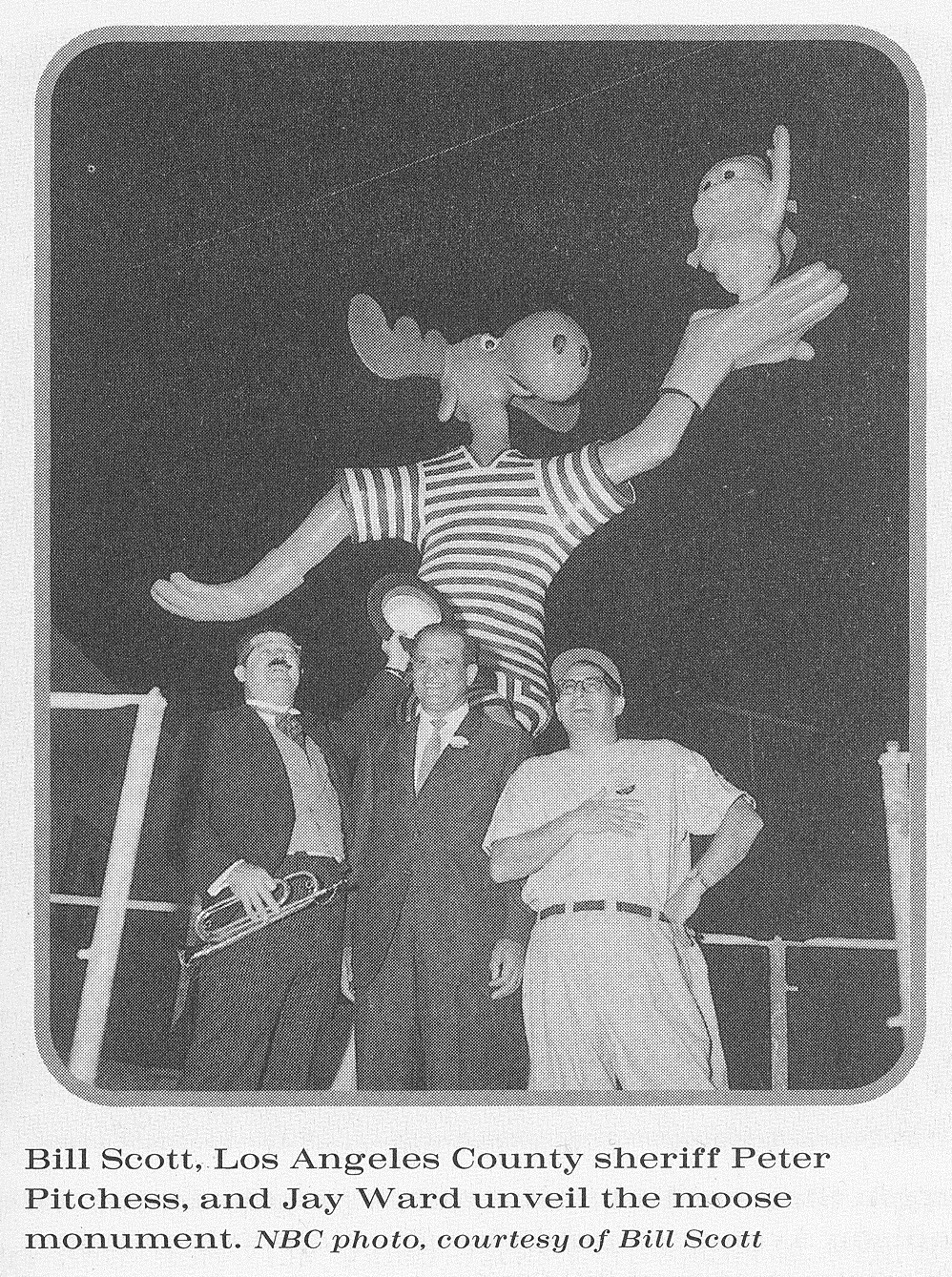 According to the Los Angeles Times, the statue’s unveiling, which was “a publicity stunt,” drew “5,000 milling, screaming, caterwauling celebrants outside the offices of the critters’ creator, Jay Ward Productions… Ward had obtained permits to have all but one lane of Sunset Boulevard blocked off and mischievously posted a sign to motorists that said: ‘Don’t complain or we’ll block this lane too.’


So why was it removed from the Strip last year? 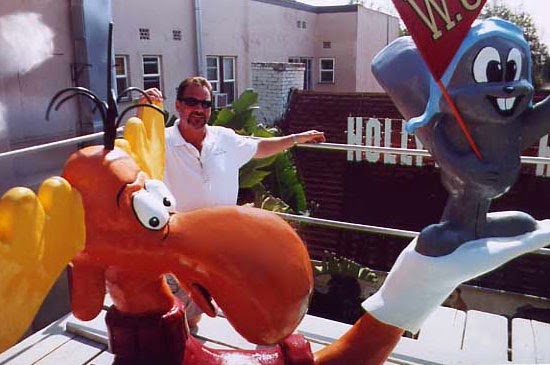 Well, I did all the inspections. I looked at it and there was a lot of rust down the center of the pipe. It had suffered a lot of corrosion over the years and needed to be refreshed. I was brought in every time the statue needed touching up. 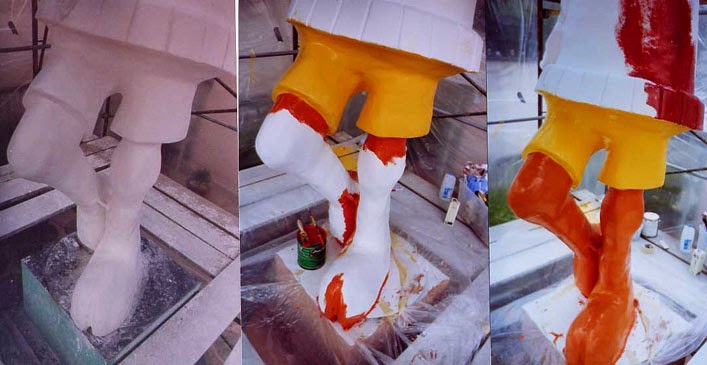 We took it to Dreamworks for a bit while we regrouped, and then it went over to my associates and we all worked on it for about three months.

How was the unveiling of the statue at the Paley Center for Media in Beverly Hills?

It was a wonderful evening. Tiffany Ward was there and they had a cloth wrapped around the statue with a big bow, and when she pulled it, it came down very elegantly. 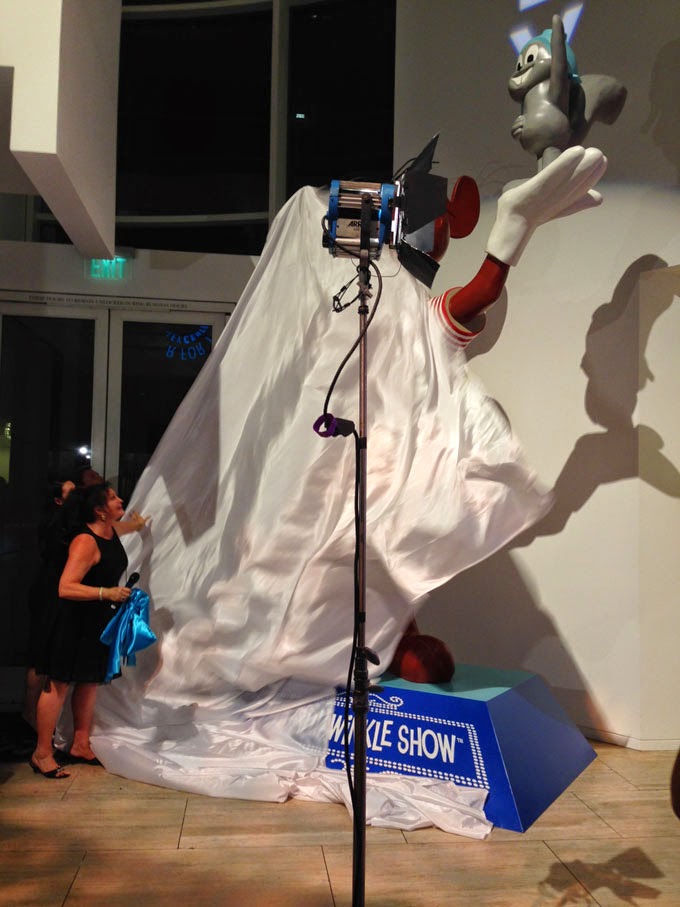 It was very Hollywood-esque and there was a big gasp when people saw it, because it had been hidden for so long while it was being repaired. There were rumors that it had been destroyed or was stolen. Now it’s back. This city is like a giant sound stage where everything gets destroyed, so this is a rare and happy ending.

Where will the statue go after the Paley Center?

I don’t know, but they need me to move it! 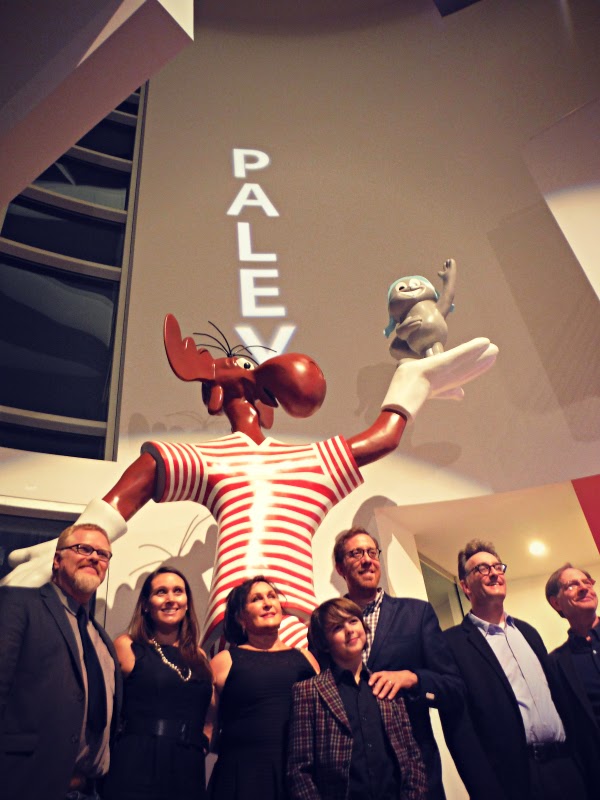 What are its actual dimensions?

Some people don’t believe it’s the real thing, they remember it being bigger than it really is. The statue itself is 14 feet tall. It was originally 20 feet up in the air, and I wanted to lower it down, so I had a new base made in the same style it originally was, just a lot lower. I also wanted to make sure he had a camera view—that Bullwinkle’s eyes were looking down—so viewers could have a Kodak moment and relate to him. Originally his eyes faced straight out, but that was OK because he was sitting in a grotto down in a pit overlooking the Sunset Strip. The statue and base weigh about 1,200 pounds.

The original was fiberglass, which was the smoothest thing they could do at the time. As the years went on, someone added paper mache, and I ripped all of that off. 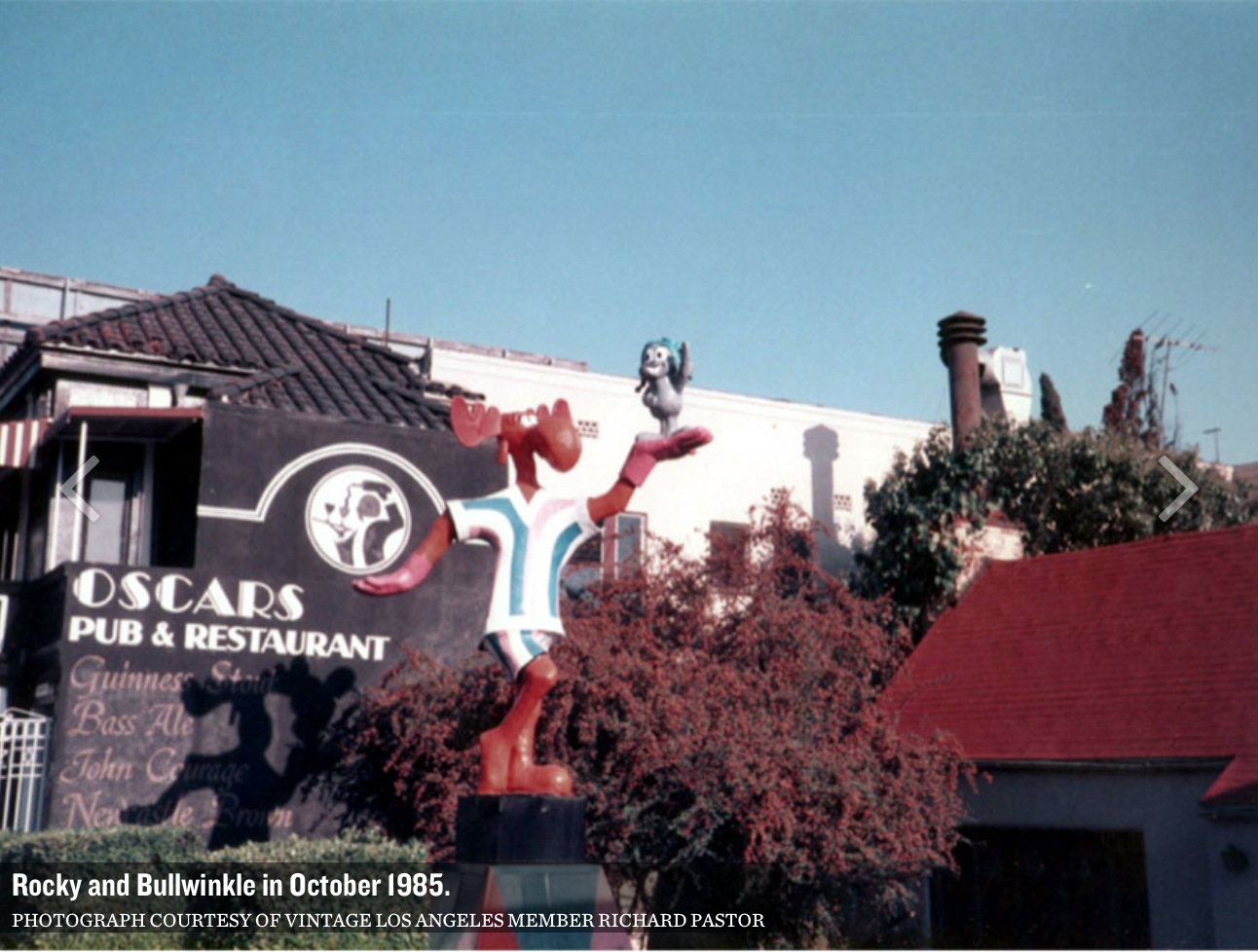 Rocky and Bullwinkle in 1985 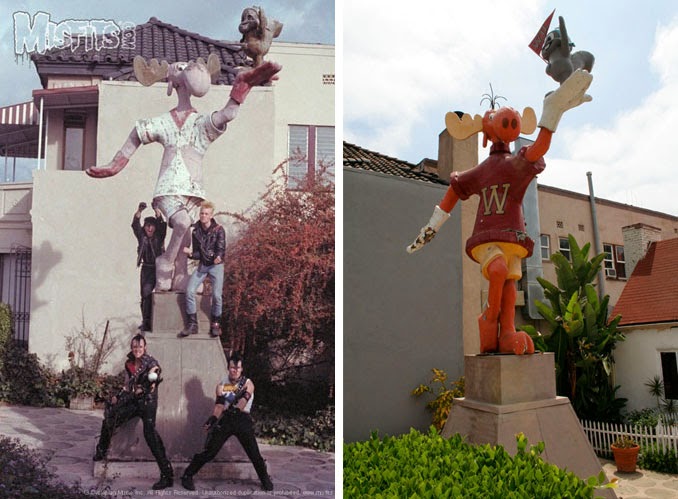 Wear and tear over the years


How similar is the restored version to the original?

I was just telling Tiffany Ward that I even counted the stripes off its original bathing suit! Everything is exactly the way it was. I took my time with the old photographs and got out my magnifying glass and I counted the stripes on his pants, his sleeves, and his shirt, and I made sure it looks exactly like it did then. The statue had been painted over so many times. That’s why we really had to strip it down. The moose had seven hairs on his head originally! Now he’s back to how he was in 1961, only brand new again. I even put a satin sheen on him. 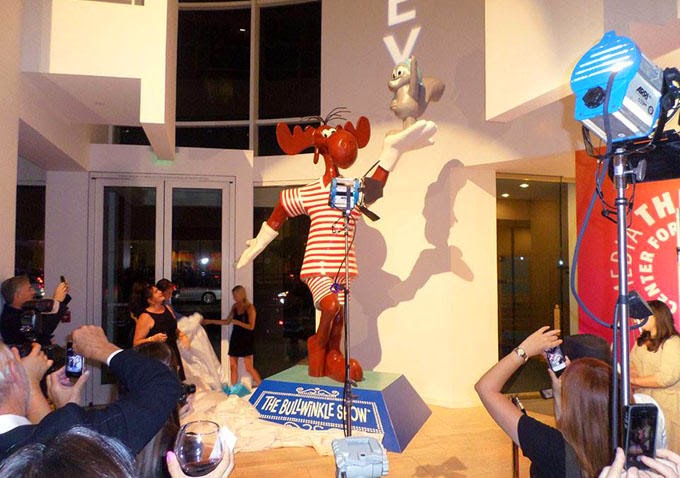 It sounds like this was an exciting restoration project for you!

Every single person who worked on this grew up watching that cartoon. It took a gathering of great artisans, from plasterers, welders, fabricators, painters, and finishers; it was a real labor of artistic skill.

Could the statue survive outside if it was returned to the Strip?

He does have aircraft paint on him and a sealer, so he could be outside, but due to the environment, pollution, and weather conditions, he would need refreshing in the future. He would be safer inside. He’s actually in the best place right now. Hopefully soon we’ll find out where he’s headed. I’ll be as excited to hear that news as you!

Alison Martino is a columnist for Los Angeles Magazine,  television producer and personality, and L.A. pop culture historian. She founded the Facebook page Vintage Los Angeles in 2010. Martino muses on L.A’s. past and present on Twitter and Instagram.