I've always been fascinated by the history of 8801 Sunset Blvd and Horn Ave.

In the 1920s, 8801 Sunset Blvd was a dusty old structure that sold and repaired furniture called Venetian Studios It looked like something straight out of the "Wild Wild West". 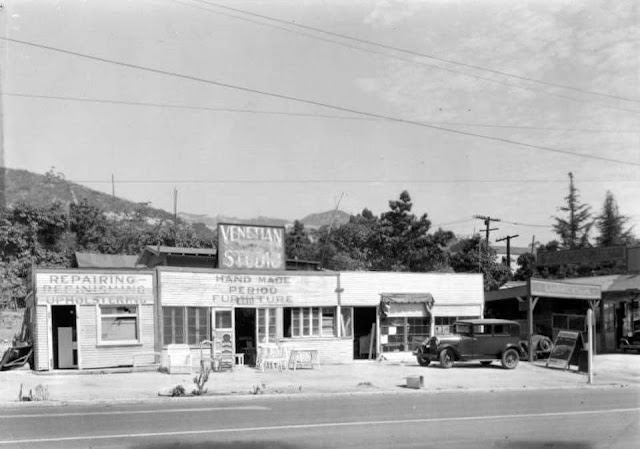 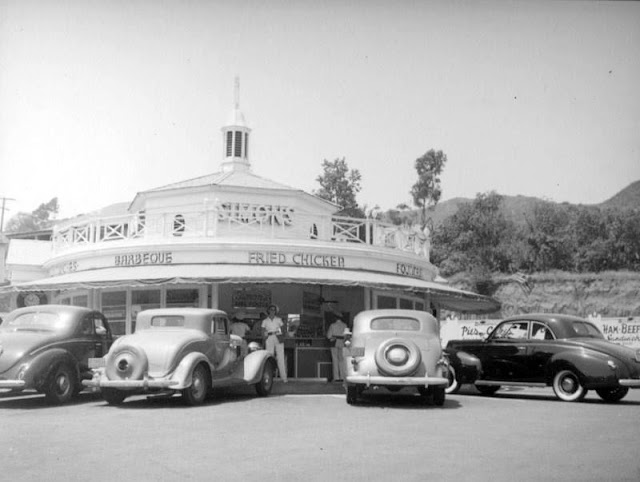 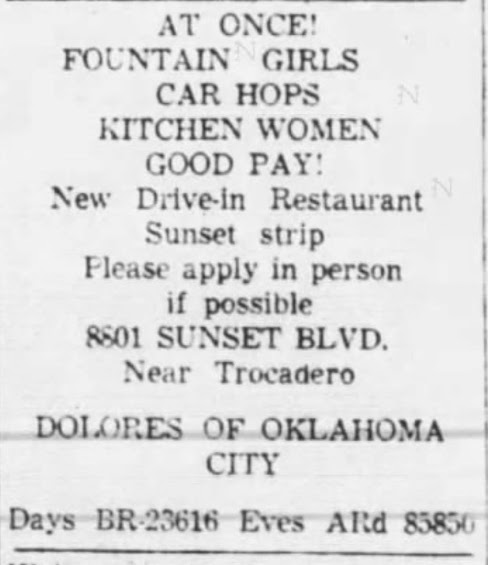 William Simon built over twenty seven drive-ins plus several regular restaurants in Southern California. Over the years, as he opened new restaurants, he would sell off drive-ins to competitors such as Dolores and Carpenters. 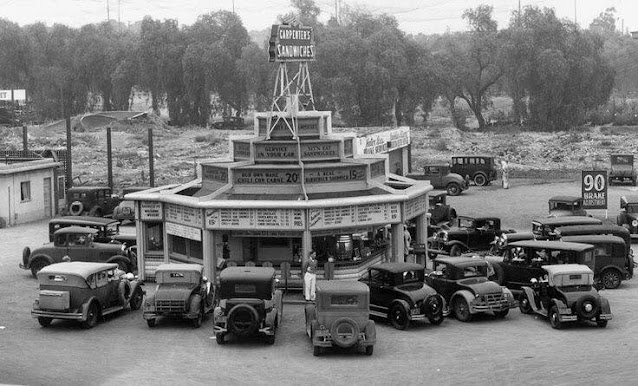 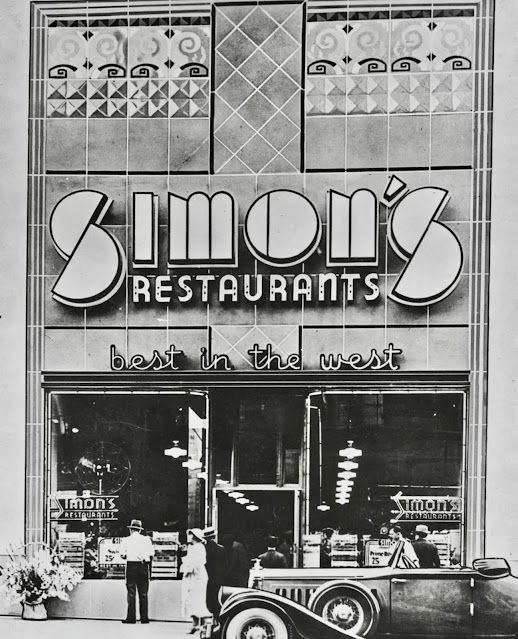 William Simon's brother was Mike Simon, who had changed his last name to Lyman, opened his own restaurants under that name, such as Mike Lyman's Grill and Mike Lyman's Flight Deck at LAX 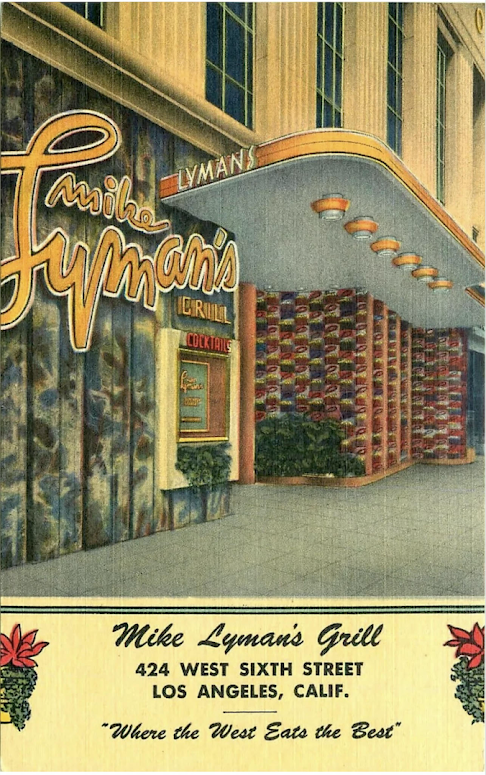 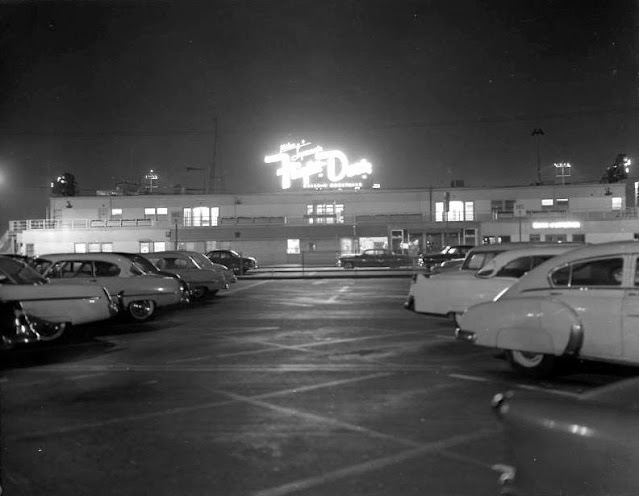 In 1945 Simons evolved into Dolores Diner. A beautiful Victorian structure. Very similar to the one depicted in "Mildred Pierce". In fact that looks like Mildred crossing the parking lot! 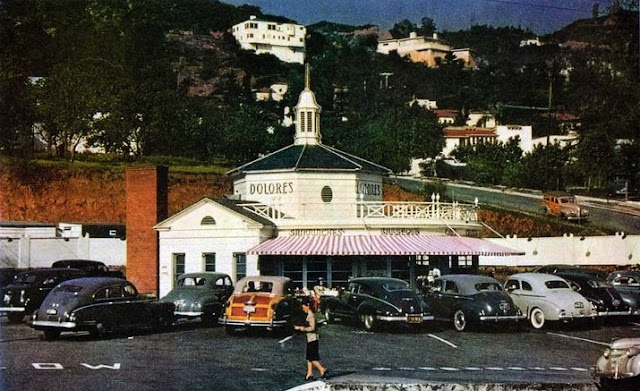 Check out Horn Ave swooping down to Sunset Blvd. That building seen on upper right became Spago. In the 1950s, a Cuban restaurant occupied it and in 1961 it became Har-Omar. But it first started out as Cafe Gala, the very first gay bar in West Hollywood, graced with Cole Porter, Judy Garland, Cesar Romero, and where Bobby Short got his start.  After Gala it was The St. Genesius.

Sunset & Holloway circa 1948. Dolores can be seen on the right at Sunset & Horn 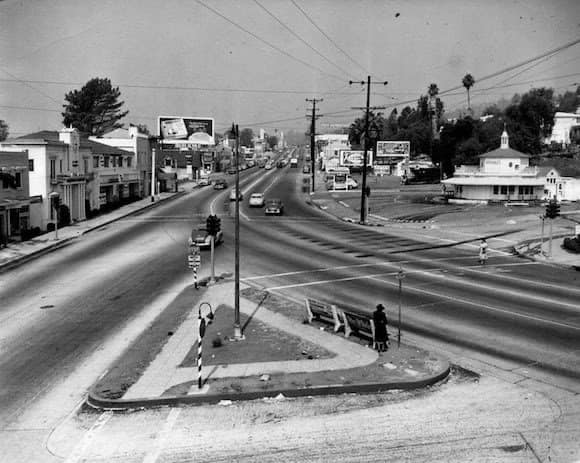 During the 1950s it had a 3rd incarnation as a diner/ car hop. It became Jack’s. Look at that glorious neon. 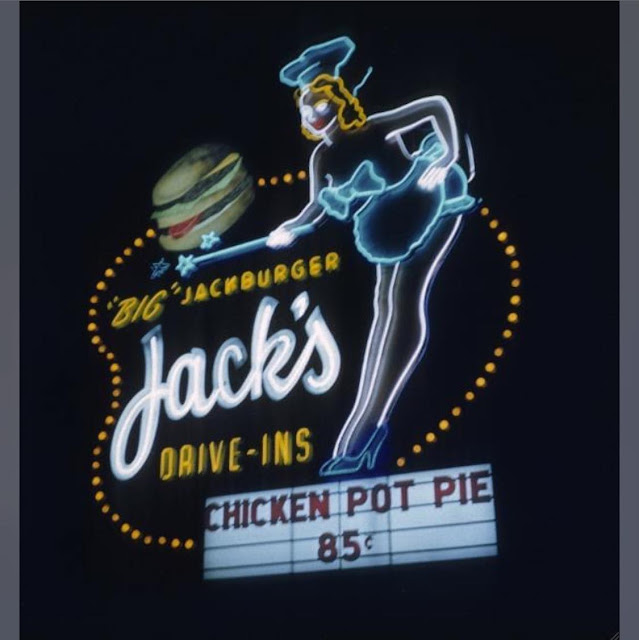 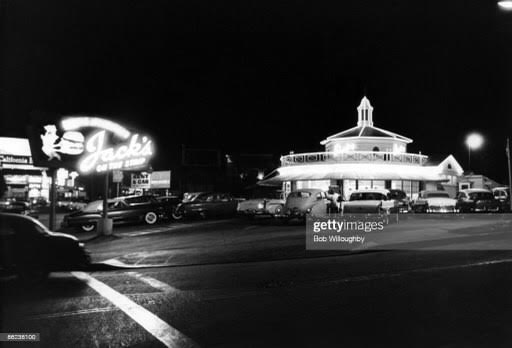 In 1961 it became a Budget Rent a Car. That man standing at the intersection of Sunset and Holloway could easily double for Don Draper. 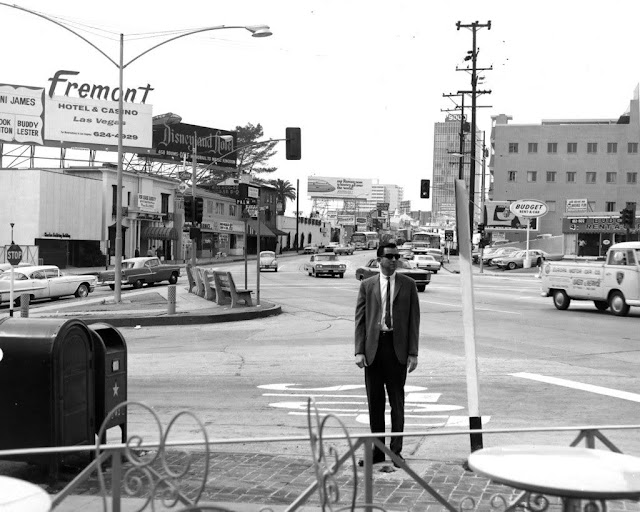 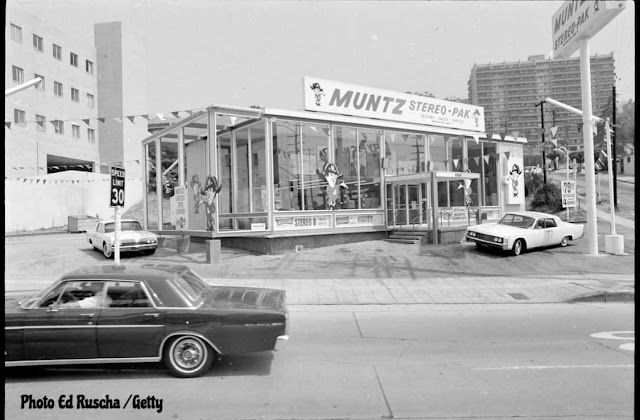 You can see what was left of the original Simons diner. Muntz used it as a massive tape library and for installations. (Most of you will recognize this  as the Tower Records parking lot) 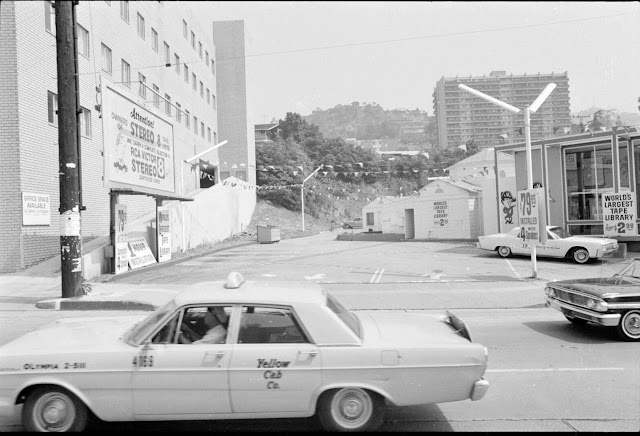 Ann-Margret takes a break from screen-test rehearsals and dines with actor Peter Brown (of the TV Western Lawman) at Har-Omar restaurant art 1114 Horn Ave in 1961. This location later became Spago during the 1980s. The building has empty every since it moved to Beverly Hills. 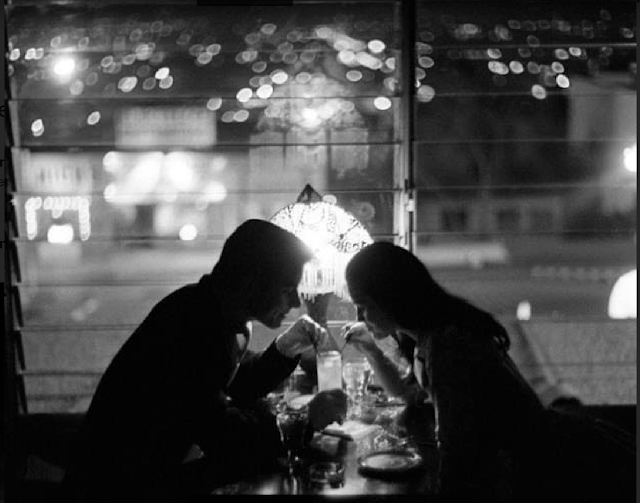 It had also been an Armenian-Russian Restaurant called Kavkaz with banquettes that faced the strip, belly dancers, etc during the mid 1960s and 1970s. 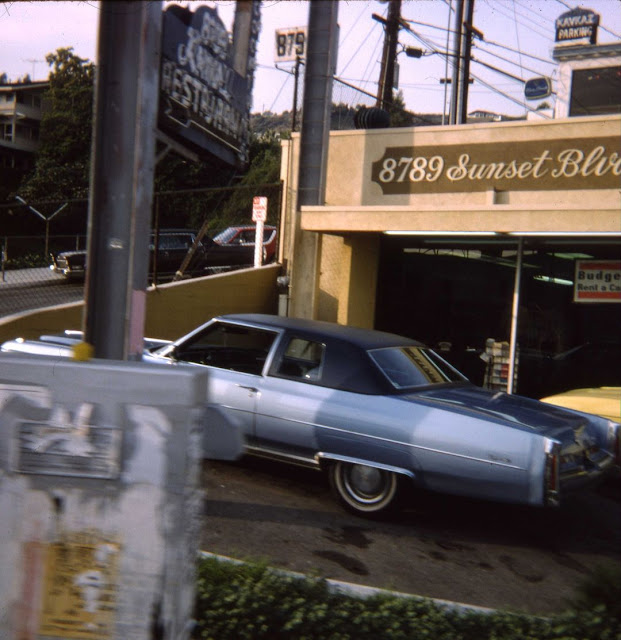 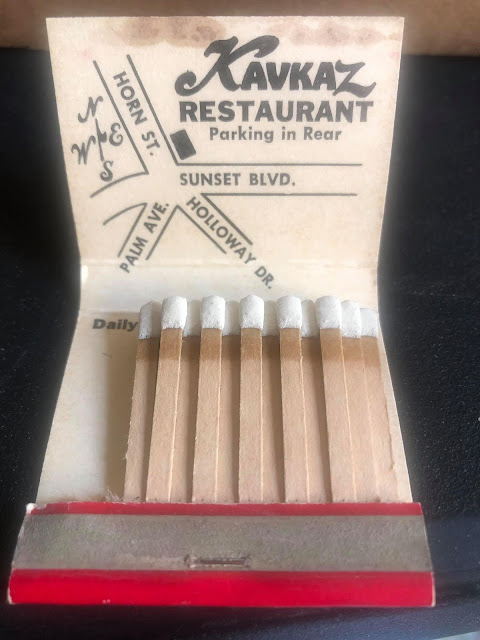 In 1969, all of the prior structures were demolished and Tower Records built their world famous store on this spot, opening their doors in 1971. In 1974 it was mentioned in the Guinness Book Of World Records as being the biggest record store in the world. 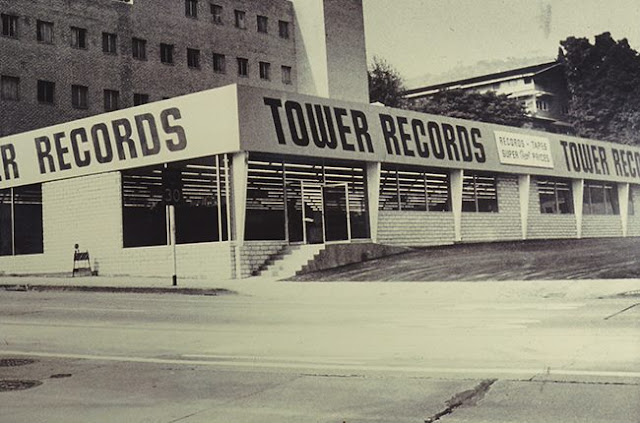 Below, Ed McMahon arrives at a Spago Oscar party thrown by Swifty Lazar in 1986. Love seeing Tower Records in the background and that famous parking lot. 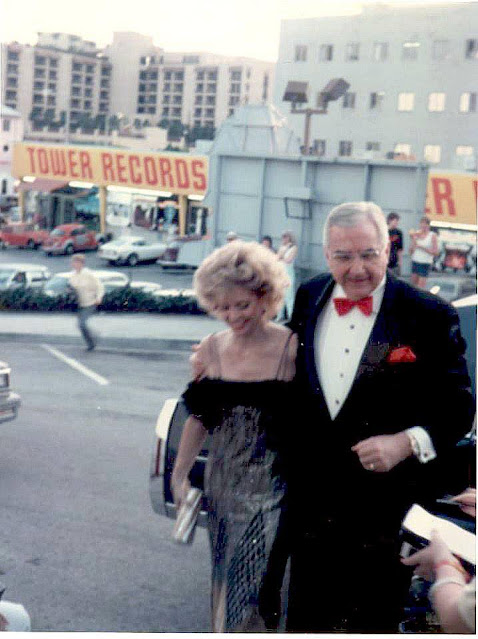 Tower Records filed for bankruptcy and closed in 2006. Since then, the building has been occupied by temporary retail and pop up stores, followed by Gibson Guitars who held a lease until 2019. In 2016, Colin Hanks had the iconic Tower Records signage faithfully painted back for the premiere party for his documentary,  "All Things Must Pass", attended by Tower Records company founder, Russ Solomon. Since then it's remained unrented and vacant. 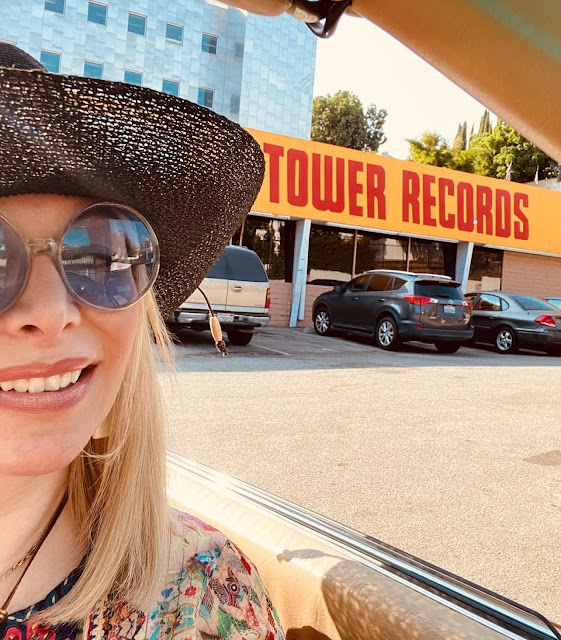 It still look like this today and that makes this inner teenager happy.

In the early 1960s, after Budget Rent A Car closed it was replaced by a 900-square-foot concrete and glass building that served as the showcase apartment for the luxury, high-rise Shoreham Towers apartment building. Shoreham Towers was constructed a half a block up Horn Avenue. The building was an exact replica of an apartment in the building, with several desks for the salespeople in the living room area. At the time, having a model apartment was a fairly new concept for an apartment building, especially an off-site model apartment. 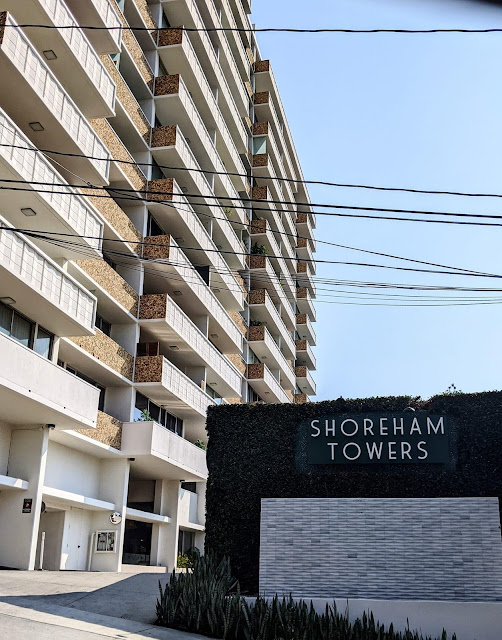 Shoreham Towers which has a long list of celebrity residents including David Lee Roth, Neil Sedaka, most recently Liza Minnelli. (Humphrey Bogart had lived on Horn Ave in previous years). The daughter of media personality, Art Linkletter, was a resident at Shoreham Towers. On October 4, 1969, Diane Linkletter, age twenty, jumped out the window of her sixth floor apartment at the Shoreham Towers. She died at the hospital from the injuries sustained in the fall. Her father blamed her death on her drug use, specifically LSD.

Although there is no demolition date scheduled for the old Tower Records structure, I hope what ever it becomes has a fascinating story to carry the property's legacy. I say dig Simon's back up and let's start over!! 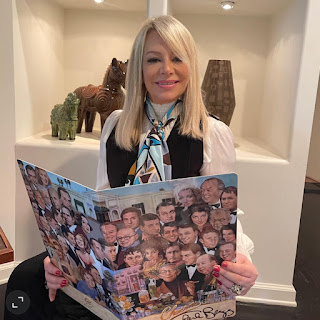