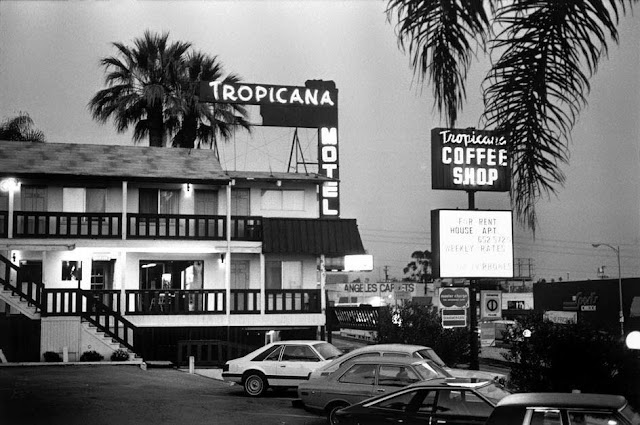 The Tropicana Motel’s Totally Rocking Heyday Joan Jett and the Ramones checked in and out of the West Hollywood hangout. Tom Waits called it home.

The Tropicana Motel in West Hollywood had a brush with celebrity even before it became a hangout for rock stars in the late ’60s and ’70s. Baseball Hall of Famer Sandy Koufax bought the inn—which was built in the 1940s and located at 8585 Santa Monica Boulevard in 1962. He was the motel’s fourth owner. 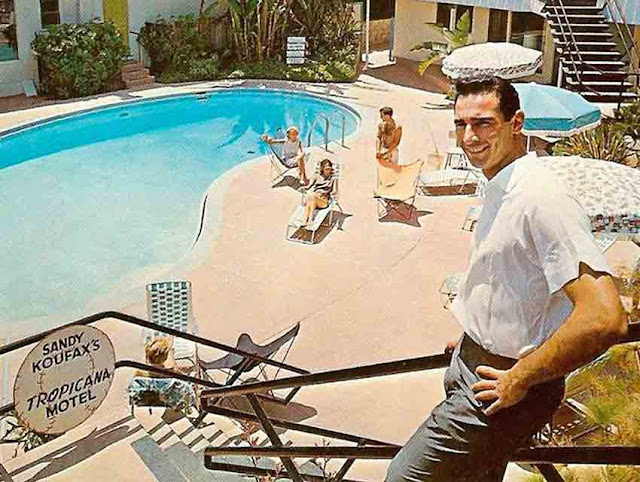 The Dodger’s investment no doubt drew clientele to the Tropicana, but the hotel became even more popular after Jerry Heiner and his partners purchased it from Koufax in the late 1960s. The joint was just a hop, skip, and blurry-eyed stumble from the Troubadour and Barney’s Beanery, and as the rock music scene grew up around those venues, the Tropicana became its unofficial HQ. Janis Joplin, Bob Marley, Alice Cooper, Iggy Pop, and members of the Runaways, the Ramones, Blondie, the New York Dolls, and the Clash all passed through. When Jim Morrison couldn’t book his usual room at the Alta Cienega Motel around the corner, he’d pass out at the Tropicana instead. According to the Los Angeles Times, Poet William S. Burroughs was occasionally spotted in a lounge chair by the pool, and Stevie Nicks and Lindsey Buckingham of Fleetwood Mac reportedly landed their recording contact while staying at the motel. 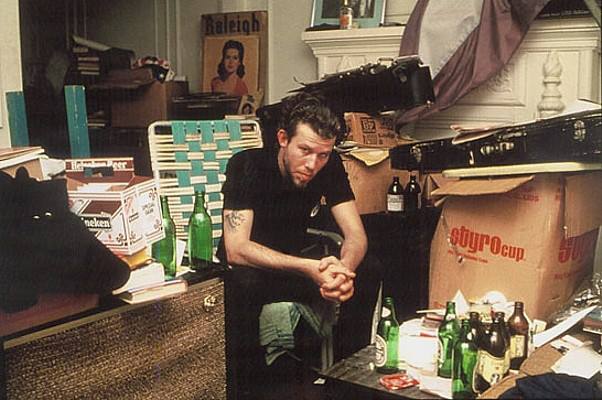 Tom Waits in his room at the Tropicana Motel 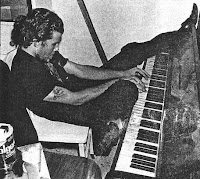 Singer-songwriter Tom Waits became a permanent resident in the ’70s and moved his piano in without permission. Ricky Lee Jones is said to have written “Chuck E ‘s in Love” on that piano.

In 1988 Waits talked about living at the Tropicana during an interview on KCRW’s Morning Becomes Eclectic. “I was on the road all the time, so when I got home, it just seemed to make sense to stay in a hotel,” he said. “I was trying to have a genuine, authentic artistic experience. That’s what I really wanted. I had a piano in the kitchen, and in those days I’d stay up all night, sleep half the day…Most people were fairly transient. Anyone you’d meet might not be there a week later.” 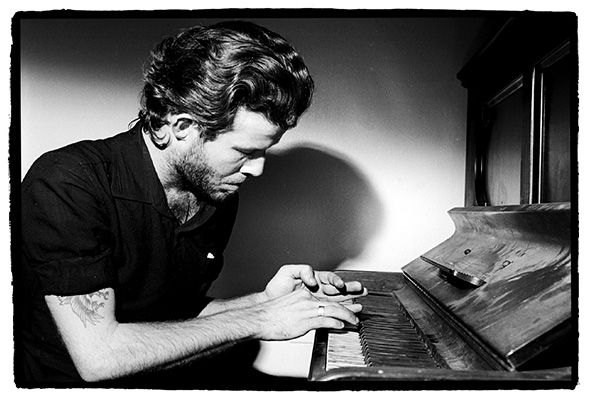 Tom Waits at the piano in his Tropicana apartment

In addition to providing rockers room and board, the Tropicana appeared in the Andy Warhol film Heat.  The motel was inexpensive despite its high profile. Guests staying a week were charged $29.75 a night. 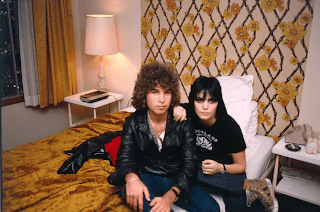 Rock and roll photographer Brad Elterman snapped the picture above of Joan Jett in her room in 1978. “It was an affordable dump that had charm,” he recalls. “Once a cool band stayed there, word spread and other bands wanted to stay there, too. There was a lot of really good energy there. It had an interesting garden courtyard layout—no long dark hallways to get to your room. Jenny Lens got photos of Joey Ramone in the pool one day. I kicked myself for missing that.” Elterman did take epic snapshots of the Ramones hanging out in front of the motel, though, and Tom Waits can be seen in a few. “No one had a cell phone and you did not want to be chained to your room and miss all of the action in the parking lot,” says Elterman. “There was one payphone booth and everyone worked it for incoming and outgoing calls. It was like an office. I took the phone booth’s phone number with me when I made my first trip to London so that I could call Rodney Bingenheimer in the parking lot collect.” 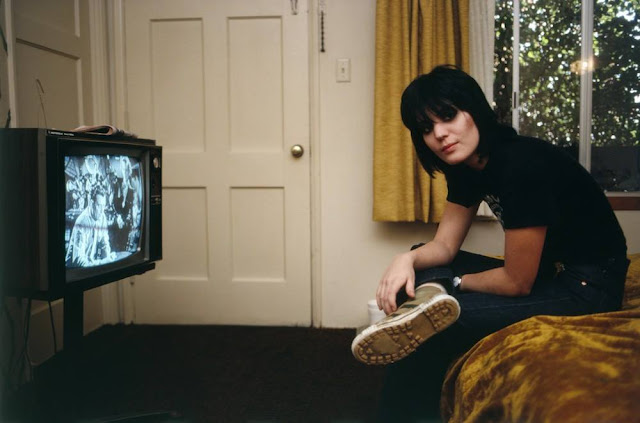 Joan Jett photographed by Brad Elterman in one of the motel rooms at the Tropicana. “I will never forget this photo of Joan,” he says. “I knew when I took it that it was something special. The setting, the TV with the coat hanger antenna, and, of course, my muse, Joan.” 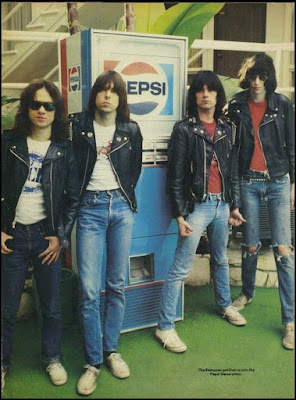 In 1968, Duke’s Coffee Shop opened at “the Trop.” Omelets, spinach salads, and Monte Cristos were the diner’s specialties. “I would go in there with Joan Jett and we would polish off these tremendous hamburgers with an assortment of French fries,” recalls Elterman. “Just before we would pay Irv at the cashier, we would grab some frozen Snickers bars!”  The Ramone's referred to it as a second home. 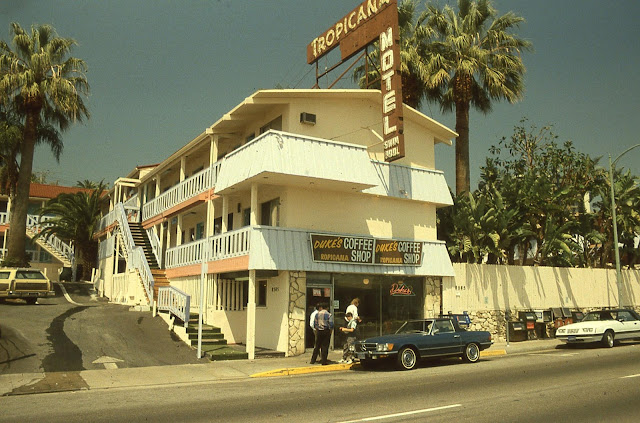 The original Dukes located at the Tropicana Motel on Santa Monica in West Hollywood. There’s a good chance Tom Waits or members of Blondie, The Runaways or The Romones were inside while this photo was taken... 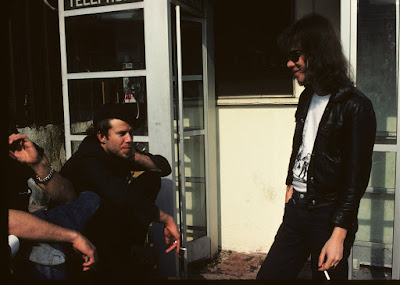 There was a phone booth in the parking lot of the old Tropicana Motel on Santa Monica Blvd and this is where Tom Waits would conduct all of his business. Photo by Brad Elterman

The wild days of the Tropicana came to an end in 1987 when the motel was demolished to make way for a $20 million dollar Ramada Inn and retail shops developed by Yehuda Naftali. Duke’s kept its rock and roll roots and moved next door to the Whisky A Go Go (and across the street from the Viper Room) on the Sunset Strip. Gene Simmons, Eddie Van Halen, Elvis Costello, Quentin Tarantino, and Mickey Rourke were all regulars, but sadly Duke’s closed in 2012. The Ramada remains, but don’t expect to see so many ’70s stars hanging around the check-in counter. 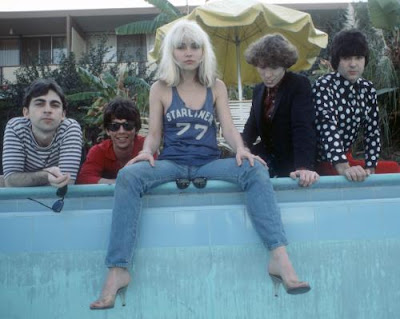 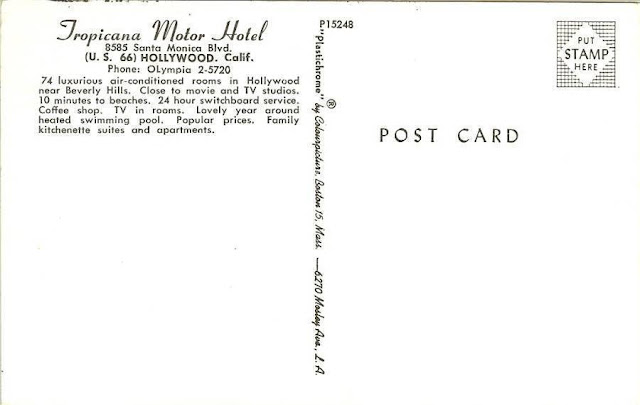 This article was published in Los Angeles Magazine on October on October 12, 2015 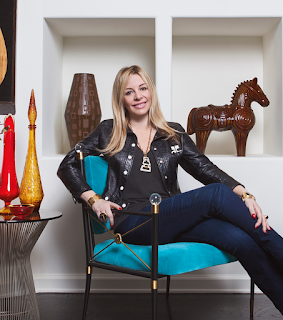