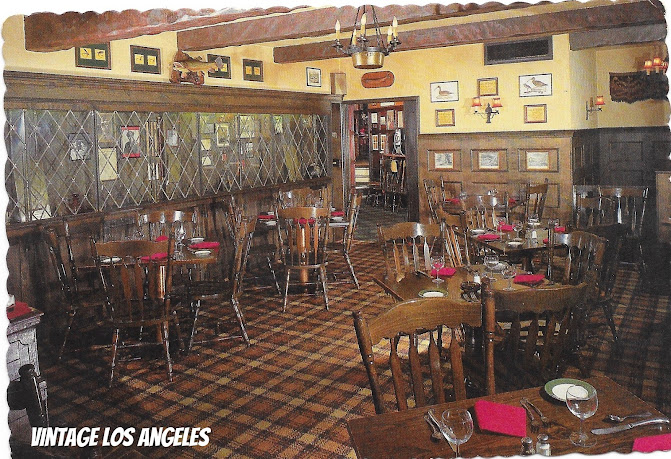 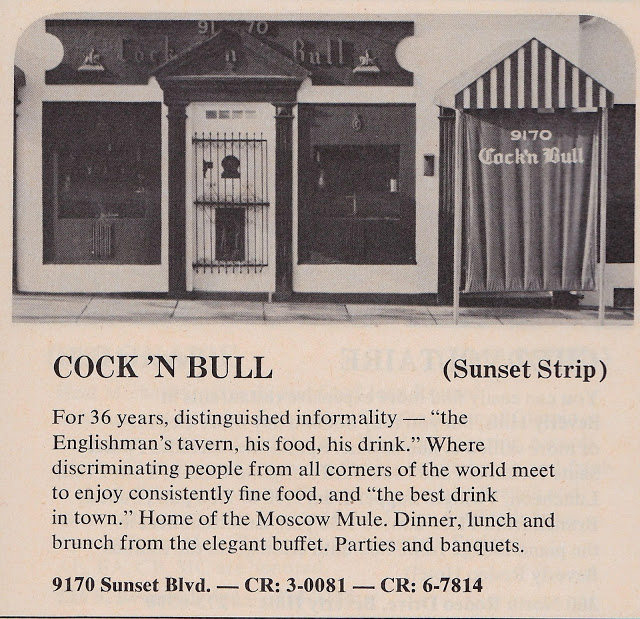 The Cock n' Bull in 1974. The CR prefix stood for CRestview
This beloved "Vintage Los Angeles" tavern once located at 9170 Sunset Strip was not only popular with the neighborhood locals, but also with 'Old Hollywood' entertainers like John Barrymore, Bette Davis, Orson Welles, John Carradine, Sal Mineo, Peter O'Toole, Jack Webb (who had his own table and lived across the street from Sierra Towers) and Richard Burton who actually changed tables every time he changed wives. It was home base for Oliver Reed, who would salute the Queen of England after a few. Anyone that didn't salute, he'd holler, "GET OUT!"  Dean Martin used to go there quite often (since his own restaurant was within walking distance) and around Christmas time he would write the entire staff each a check for $200.00, from the busboys on up! In Shelly Winter's autobiography she mentions going to the Cock n' Bull the day Germany fell and Hitler was dead. Previously, she had accidentally discovered a photo of Hitler in the office which the staff had been using as a dart board. So, she retuned to urinate below the picture, "because she couldn't pee on Hitler's face". It was also popular with musicians and rockstars through the years such Jim Morrison, Keith Moon, The Eagles, Rod Stewart (who would bring his entire soccer team) and Joe Cocker, who named his band, "Joe Cocker and the Cock n' Bull Band after his favorite Sunset Strip haunt. It was big with the big-wigs at Geffen Records because it was conveniently located next door, Roger Corman had offices upstairs, Peter Lawford had a membership card and at times had his car keys taken from him. During the 1970s and 1980s, my parents would bring their industry friends to the Cock n' Bull. I remember asking actress, Beatrice Straight for her autograph one night after seeing Poltergeist at the ABC Entertainment Center that very same day (I was even years old). A few years later I sat two tables away from Madonna and Sean Penn before they got hitched. 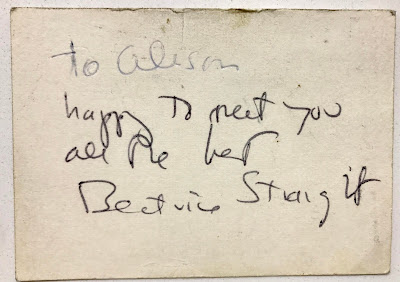 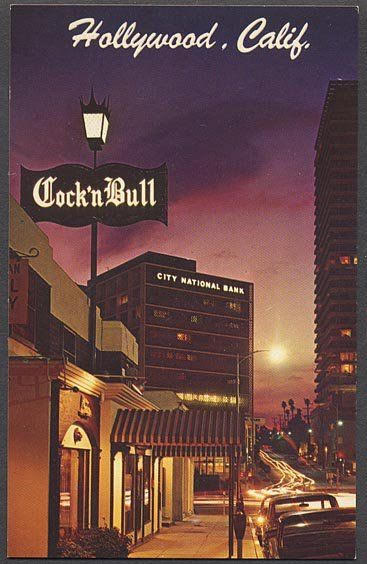 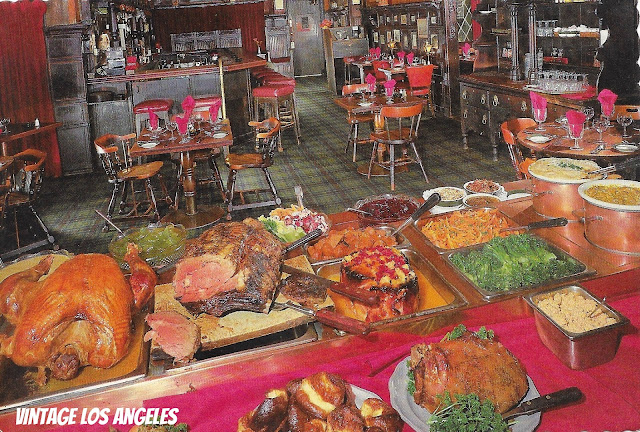 The main dining room had a charming fireplace which made it feel like you were in a real English cottage while eating one of the most popular meals: the Welsh Rarebit, consisting of cheese sauce on toast with a little paprika sprinkled on top and pickled onions on the side. The Yorkshire Pudding and roast beef were a personal favorite when we went for their legendary Easter Buffet. The Cock 'n Bull's founder Jack Morgan, was generally credited with making vodka a popular drink in America by concocting the Moscow Mule (vodka and ginger beer), which was served in copper mugs. It was also referred to as, "the Drink With the Velvet Kick". 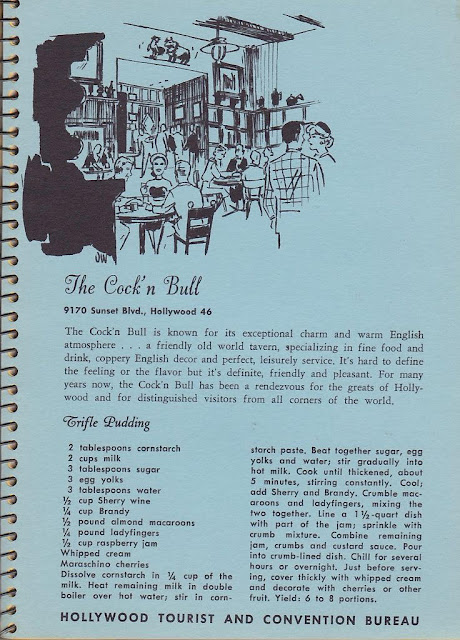 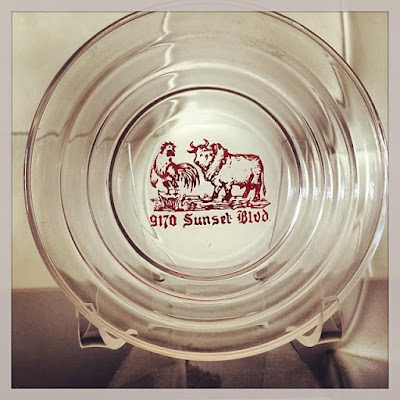 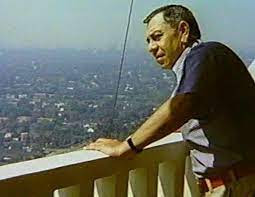 Jack Webb on the balcony of his Sierra Towers apartment looking over at the Cock 'N Bull
The restaurant spanned succeeding eras of nightclubs, coffee houses, discotheques, topless bars and rock clubs in the neighborhood. But, sadly, the Cock 'n Bull closed soon after it's 50th anniversary in 1987 (that's ancient in southern California standards) and became a Jaguar dealership. There is a plaque above the entrance in honor of this institution. It was legendary and busy to the end. A Hollywood institution, like Chasen's, which was immaculate, professionally run and always a fun place to go. Jimmy Breslin once wrote, "You didn't have to worry about some guy throwing up on your shoe or punching you in the mouth. The place had class." Jimmy must have missed the nights Keith Moon and Oliver Reed famously wreaked havoc at the bar! 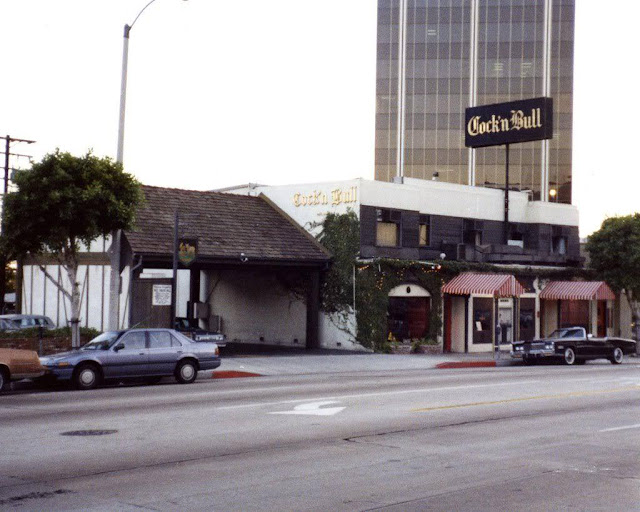 According to the Jack Webb Archives, that's Jack Webb's Caddy out front. Photo circa 1980 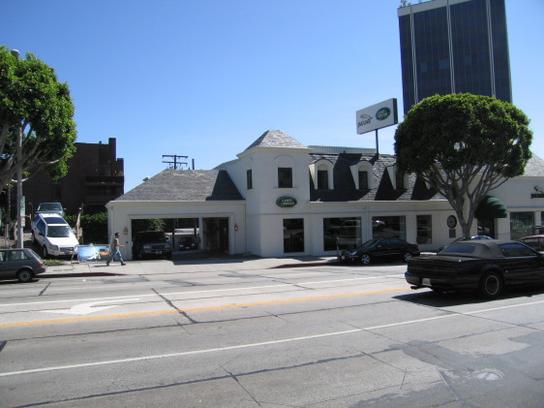 Today the old Cock n' Bull structure has been converted to a Jaguar dealership. But at least there is a plaque in its honor 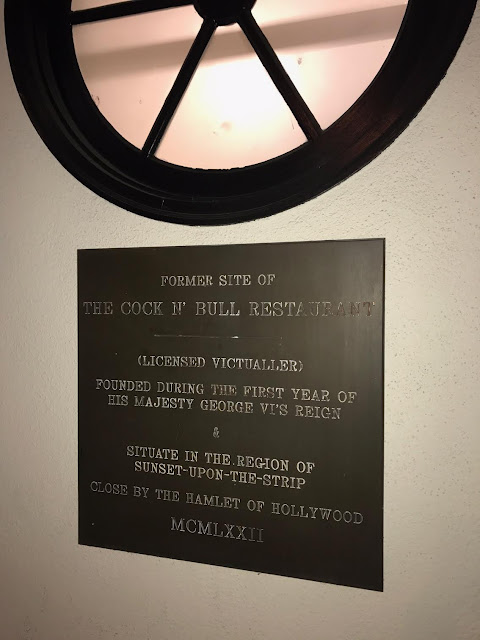 I just scored a rare postcard on Ebay for a few bucks after a 10 year hunt. I think this calls for a Moscow Mule in a copper mug! 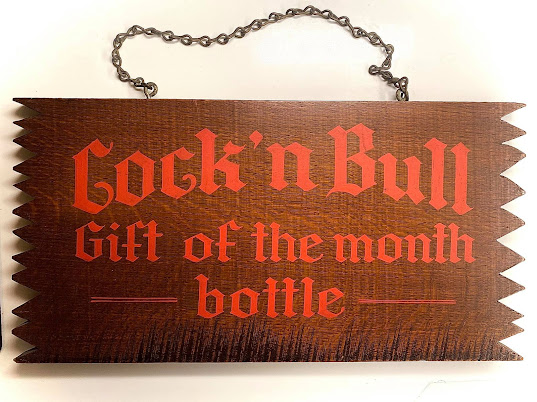 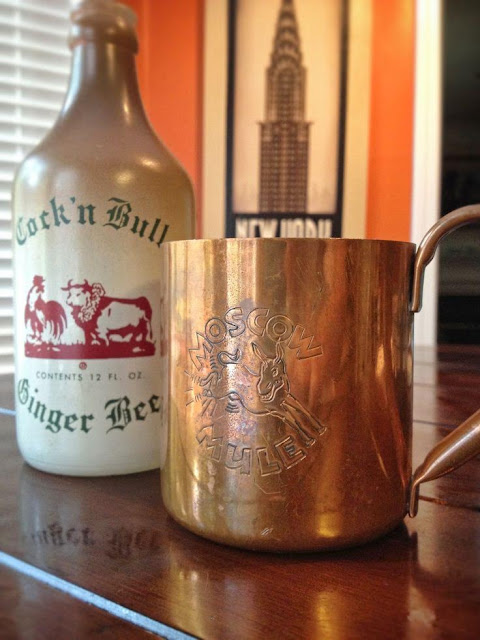 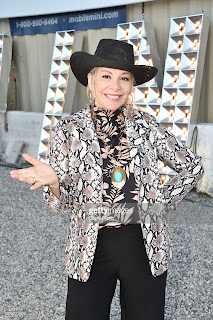 Alison Martino is a writer, television producer and personality, and L.A. pop culture historian. She founded the Facebook page Vintage Los Angeles in 2010. In addition to VLA, Martino muses on L.A’s. past and present on Twitter and Instagram and on her website, alisonmartino.com

Alison also writes articles about the history of L.A for Los Angeles Magazine and appears on weekly show called the SO CAL SCENE airing on Spectrum News 1
Alison's book of unpublished photos of L.A.'s past is also currently in production.