It’s impossible not to think of Tower Records when referring to the Sunset Strip. It’s even more impossible to accept that the beloved store once located at the corner of Sunset Boulevard and Horn Avenue is no longer in business. 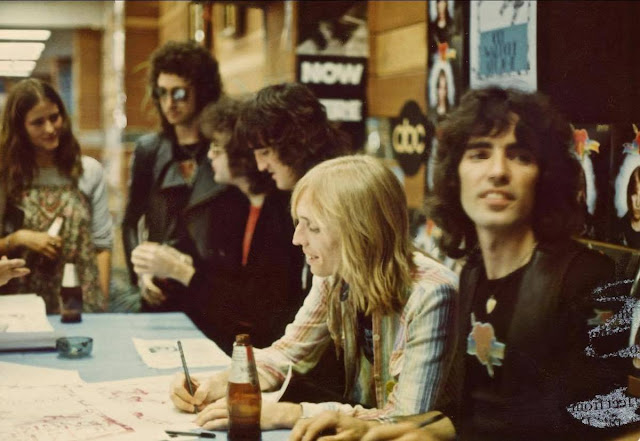 I recently had dinner with a friend not too far from the old Tower location. As we were paying our bill, we discussed what we should do next. I joked that we should walk down to Tower Records and browse through rows and rows of LPs and cassettes, then head across the street to Tower Video to rent the latest release (most likely on VHS).
I wish it wasn’t just a fantasy. You see, Tower Records was more then just a record store, It was a musical rite of passage. It’s where kids graduated to die-hard music fans. I spent my very first allowance money on Blondie and Devo records. I’ll never forget the anticipation of rushing home to get them on the turntable! My friends and I would remove the cellophane from new records before we even got to the car. Even the store’s parking lot had its own identity. On weekends, there was so much pandemonium that fistfights broke out over available parking spots. It was the hub of the Strip, located directly across from the original Spago and a few blocks east of the Rainbow Bar and Grill and the Whisky a Go Go. It’s where rock stars mingled with locals and tourists; it wasn’t uncommon to bump into Robert Plant, Stevie Wonder, Robert Stigwood, Ella Fitzgerald, Ringo Starr, Harry Nilsson, Elvis Costello, Robert Evans, Smokey Robinson or even George Burns in the aisles. I once witnessed Valerie Bertinelli (who had just married guitarist Eddie Van Halen) turn Van Halen’s “JUMP” record around to reveal her hubby’s photo, and I eavesdropped on David Bowie discussing English imports at the info booth that doubled as a DJ station at the center of the store. John Lennon even recorded a voiceover for this Tower Records commercial: 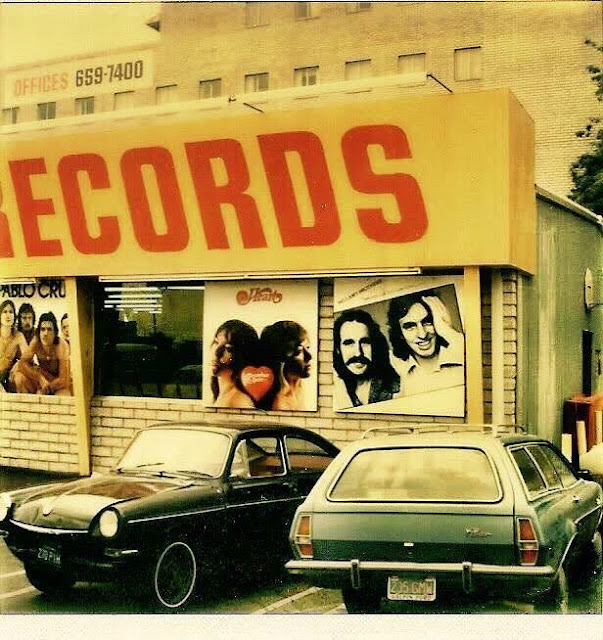 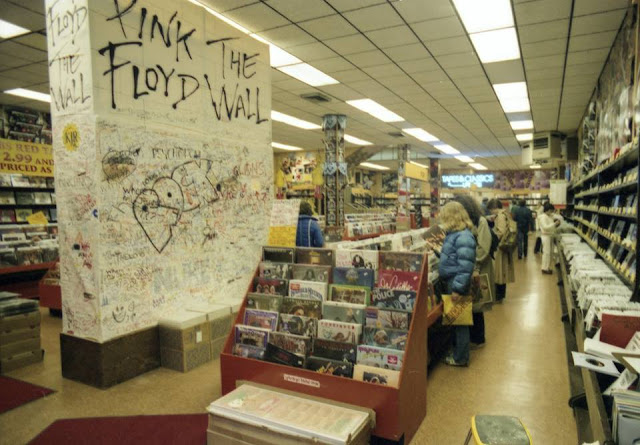 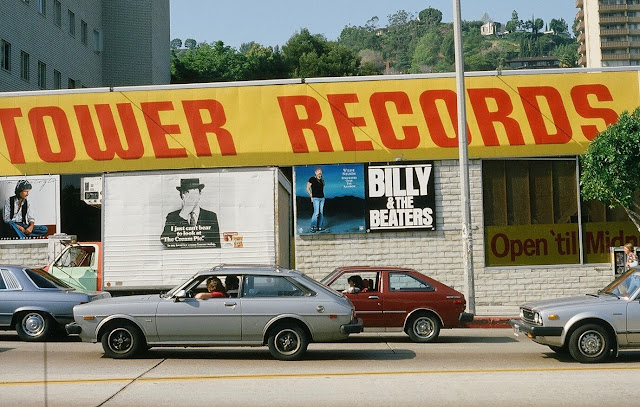 Tower Records was a music business melting pot. But the employees (some of which were in soon-to-be-famous bands themselves) were the main attraction. They knew everyone’s name, what music they liked, and what car they pulled up in. Axl Rose, a Tower Video employee, once shoved a flyer for his new band Guns & Roses, which was playing down the block at Gazzarri’s, into my bag. In 1976 Elton John told Playboy that if he weren’t a rock star, he would have wanted to be a Tower Records alumni.
Elton John shopping at Tower Records 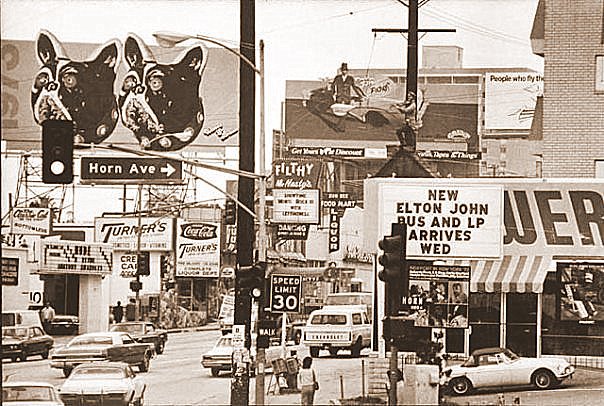 The Sunset Strip, the year Tower Records opened. You can also see Classic Cat Strip Club on the far left which later became University Stereo and then Tower Video. The next Block. Tower Classical would eventually open up next door. 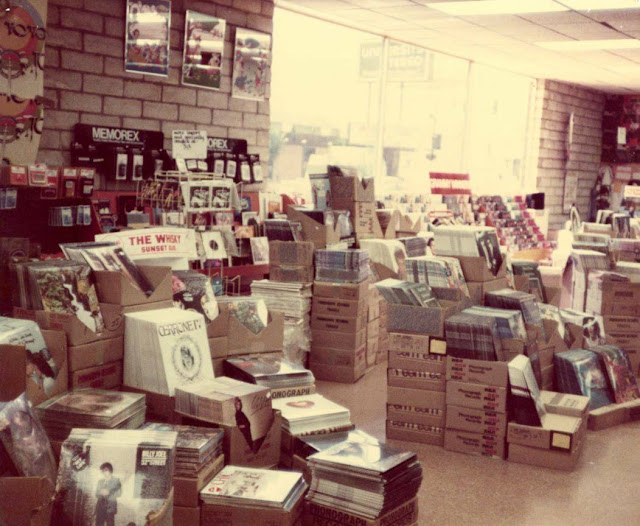 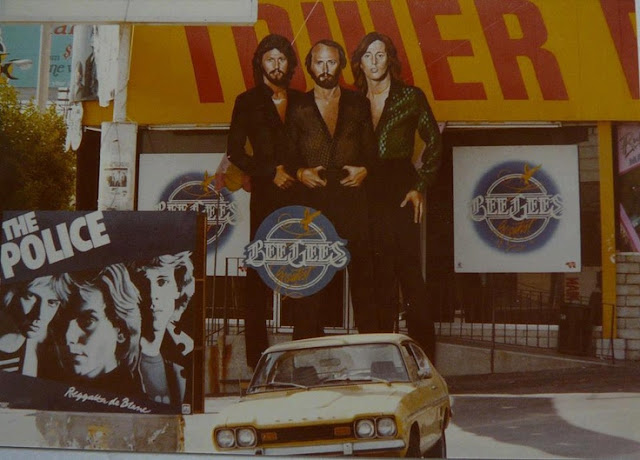 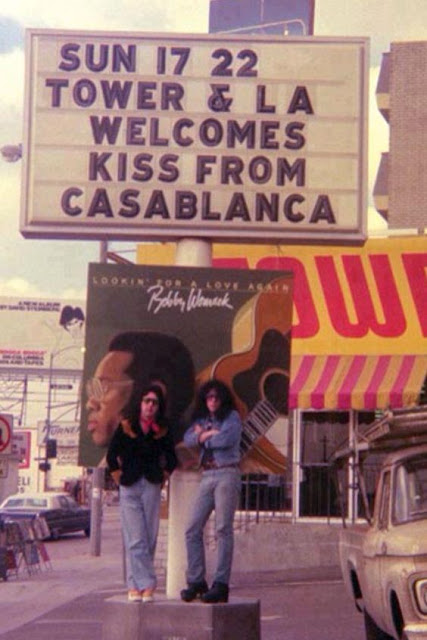 Some of us teenagers dropped by five times a week since the store couldn’t keep the latest singles in stock. Prince’s “Purple Rain” was consistently sold out, but if you were in with one of the employees, they would hold a copy for you. I also remember waiting in a huge line in the parking lot awaiting U2's "Joshua Tree" release and then walking across the street to Ticketron (located inside Tower Video) to purchase tickets for their world tour.  Next door to Tower Video was the Tower Classical Annex which had some of the greatest classical selections in the country. 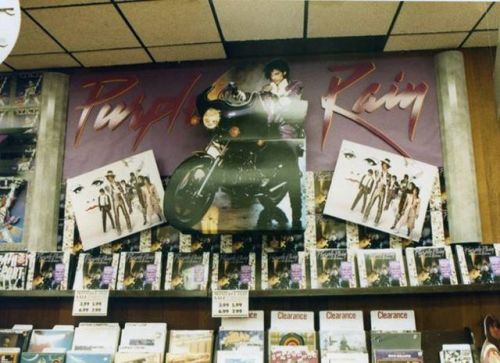 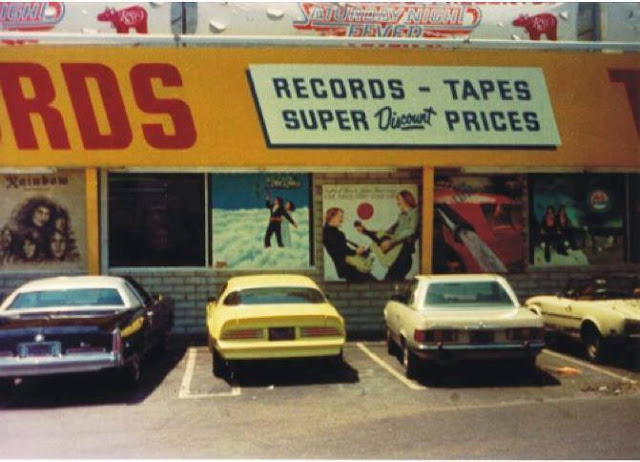 Tower Records, which stayed open until 1 a.m. on weekends, was a music venue, too. Hundreds of musicians including Rod Stewart, Randy Newman, and XTC performed live inside the store, and thousands of fans wrapped around the L-shaped parking lot to get in when Aerosmith, Keith Richards, Dolly Parton, James Brown, Duran Duran, and Brian Wilson stopped by to sign records. David Lee Roth shut the Strip down for several hours when he rappelled down a replica of the Matterhorn built on the record store’s roof to deliver his album “Skyscraper.” Alice Cooper drove up in a huge trash truck to deliver “Trash.” 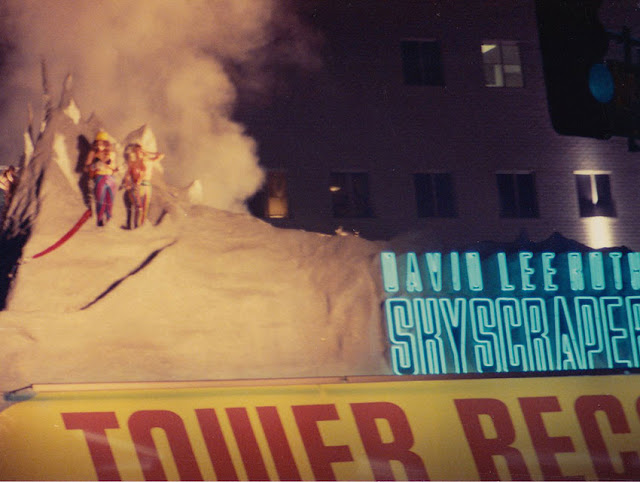 The music mecca shaped my youth and will always be a part of my soul. It’s hard not to get misty-eyed thinking back on it now. (Thankfully, I saved a dozen of my Tower Records red and yellow vinyl bags. Today they are about  as desirable as collectible records.) 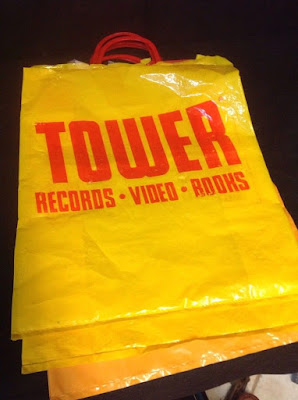 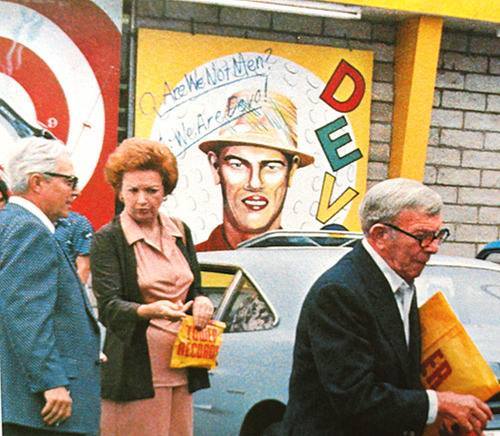 Even God had the 'uncontrollable Urge" to shop at Tower Records. (George Burns) 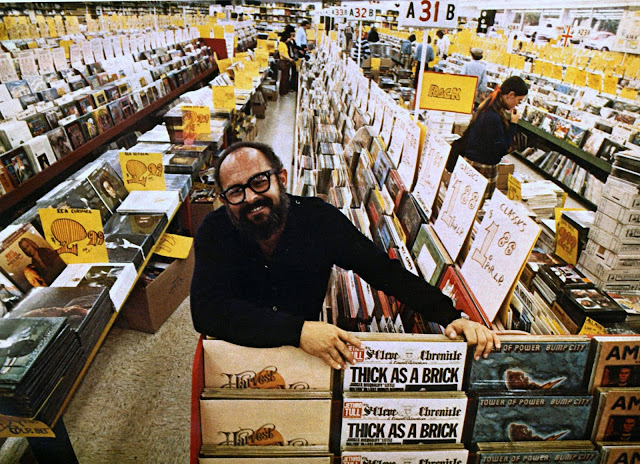 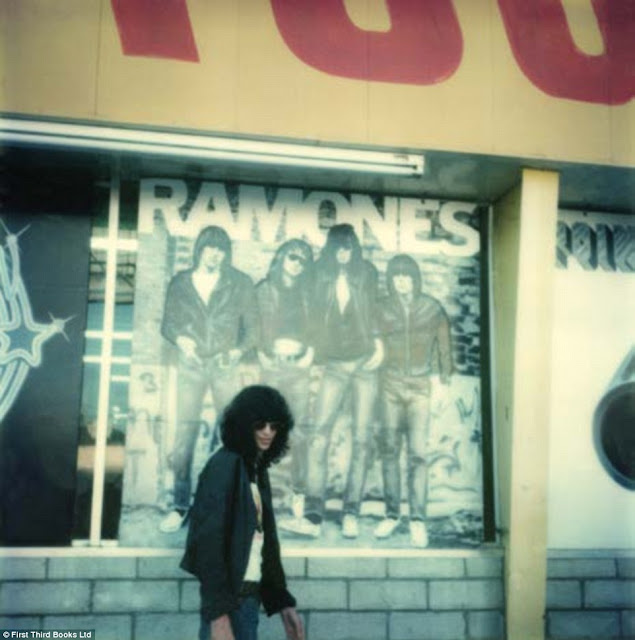 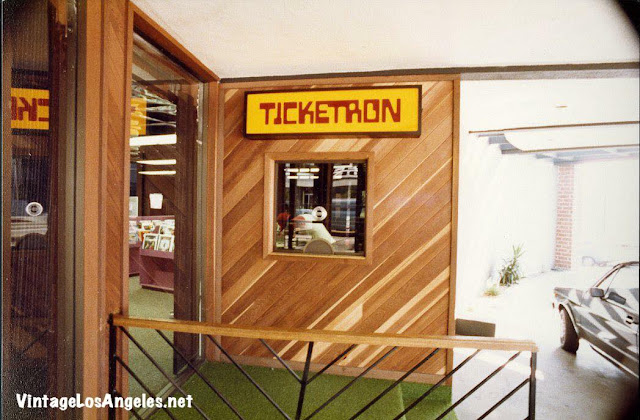 Ticketron located at Tower Video across from Tower Records on Sunset Strip. Love seeing the old circular driveway to the right.

That’s why I am personally relieved and thankful to Colin Hanks for making a feature documentary that will always help keep the Tower Records’ legend alive. His film, All Things Must Pass examines the iconic company’s rise and fall and profiles its rebellious founder, Russ Solomon. After watching an exclusive cut of the film in 2015, I can say it’s the closet thing to a Tower Records time machine. The images and archival footage are spellbinding. I could almost smell the vinyl through my screen. In addition to bringing the store back to life, the documentary taught me its backstory: Tower Records began in a Sacramento drugstore owned by Russ Solomon’s father, and Solomon opened his second outpost on Columbus Avenue in San Francisco in 1968. Two years later Tower Records opened on the Sunset Strip, taking over the site where “Madman” Muntz had sold the very first car stereos. Solomon eventually opened 189 stores around the world, and the franchise made $1 billion dollars by 1999. Then things took a dramatic turn: In 2006, the company filed for bankruptcy. Some blame the internet, among other things,  for Tower's demise. Itunes, the Illegal downloading of music, and Youtube most likely also contributed to the  record store chain's closing. I do understand that times and technology change, but to those of us who grew up in the prior century, Tower was more than just a "record store". It was part of our lives.  I personally LOVED opening an album. The cover art and liner notes back then were just as important as the music. Downloading today just seems very impersonal.  The day Tower closed a piece of my soul went with it 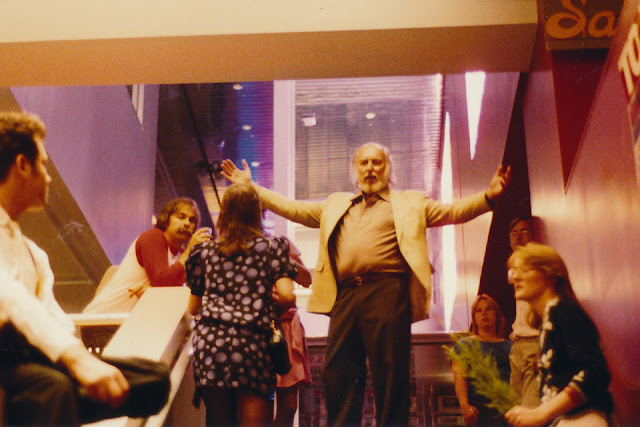 Below is an aRchive of my interview actor and film maker, Collin Hanks in 2015