A tribute To "Dino's Lodge" for Los Angeles Magazine 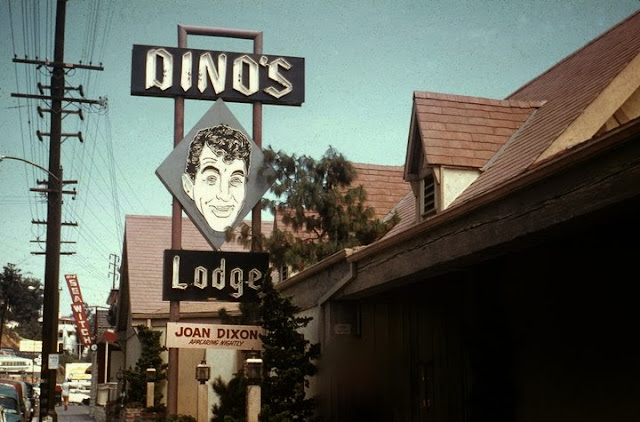 In the summer of 1958, Dean Martin and his business partner, Maury Samuels, opened a restaurant at 8524 Sunset Blvd. Here's what happened after that 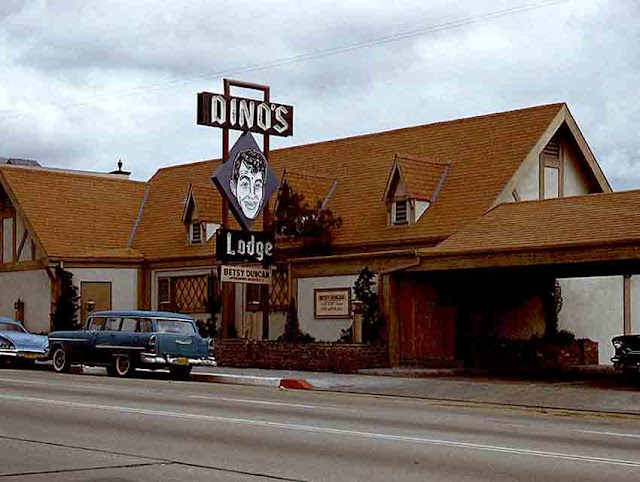 Remember the L.A.-based private eye series 77 Sunset Strip? The 1950s series was filmed entirely on the Warner Brothers lot, but the opening 30-second sequencewas filmed in front of Dino's Lodge, located at 8524 Sunset Boulevard. In the summer of 1958, Dean Martin and his business partner, Maury Samuels, bought a former restaurant called The Alpine Lodge. They hired Dean’s brother Bill to manage the place, and immediately renamed it “Dino’s Lodge.” Out front they placed an enormous neon sign featuring Dean Martin’s handsome face and it became one of Hollywood's campiest novelties. The “suit and tie” jazz joint was instantly hip, serving home-style Italian cuisine, steaks, and breakfast until 4 a.m. The interior included dark wood paneling and comfortable leather booths meant to replicate Martin’s personal den. Continuous entertainment was provided in a separate cocktail lounge that promoted female singers—perhaps ole Dino didn’t want any male competition—but by 1960, he had flown the coop for the Sands in Las Vegas and sold the restaurant to new owners who kept the name and neon sign for 27 additional years. Visitors flocked to the restaurant in hopes of getting a glimpse of Dino, but his neon face is as close as they got.

By the early ‘70s, the swanky restaurant that had once hosted parties for Frank Sinatra and Elizabeth Taylor descended into a tourist trap and was abandoned by its celebrity clientele. During the Miami Vice era, the block on which the restaurant sat suffered a devastating makeover. What was left of Dino’s Lodge, the Tiffany Theatre, North Beach Leather, and the 1960s dance club the Sea Witch were all stuccoed over, leaving them unrecognizable, then replaced with bland looking offices. A 77 SUNSET STRIP dedication was later engraved on the sidewalk in front of the original entrance to Dino’s.
This September, the entire block was demolished to make way for a massive development. I’m not sure if the plaque will survive, but the new parking attendants should carry a comb in their back pocket in honor of Ed “KOOKIE” Byrnes.
All photographs courtesy Alison Martino Collection
Alison Martino is a writer, television producer and personality, and L.A. pop culture historian. She founded the Facebook page Vintage Los Angeles in 2010. In addition to CityThink and VLA, Martino muses on L.A’s. past and present onTwitter. 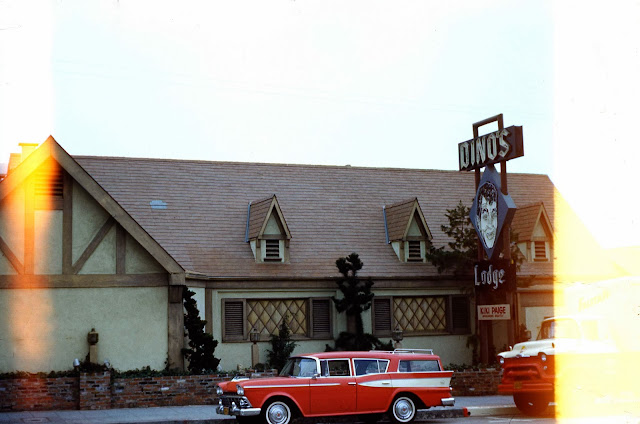 The collection is growing! 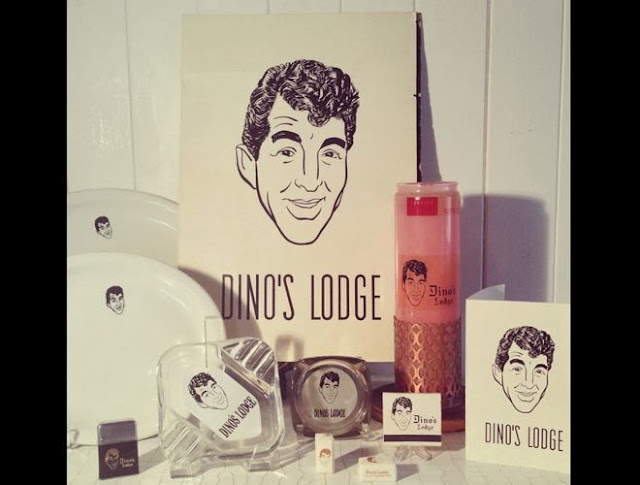 Click here for the original link to "Los Angeles Magazine"