Recently Universal Music has taken over Capitol Records. The fate of the tower is still unknown. Condos are rumored to take over...

But there’s one holiday tradition that I enjoy every year, it’s spotting the historic Christmas tree that tops the iconic Capitol Records building on Vine Street in Hollywood since 1958. 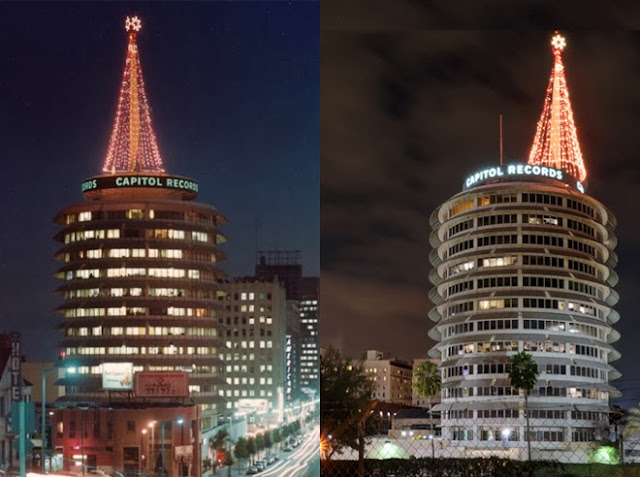 Designed by Stewart Romans of Ollsen Lighting and featuring 4,373 bulbs (at 25 watts each), the tree was the first of its kind, and it has been a part of the Hollywood skyline each December since 1958, save for 1973, when L.A. experienced an energy crisis. (According to the music company, the Capitol Records switch board lit up like a wild fire that year with calls from concerned Angelenos wanting to know if the tree would ever return.)

The Capitol Records Tree will lit up 55th time this past Decemeber, 2013  just in time to brighten the evening commute. In recent years, the families of Nat King Cole and Frank Sinatra have flipped its switch, and Capitol will keep us informed who the lucky ones will be in the future.

Of course, the seasonal greenery isn’t the building’s only topper. A blinking light spells out Hollywood in Morse code and has done so every night since the building was erected. In fact, Leila Morse, Samuel Morse’ granddaughter flipped the beacon switch! It’s only been altered on rare occasions, like in 1992 to honor Capitol’s 50th anniversary, when it spelled out Happy Birthday, and is proof some things in L.A. (rarely) change.