The Sheik's House in Beverly Hills 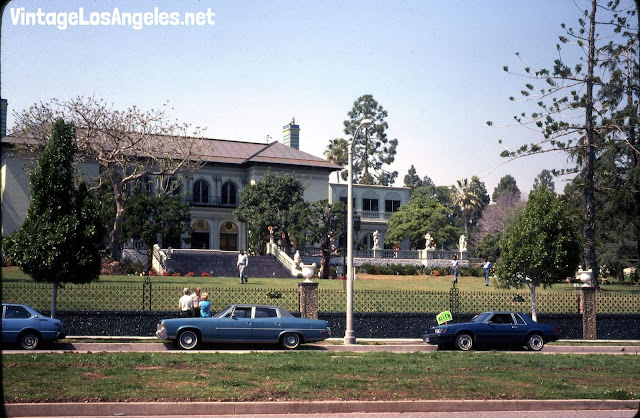 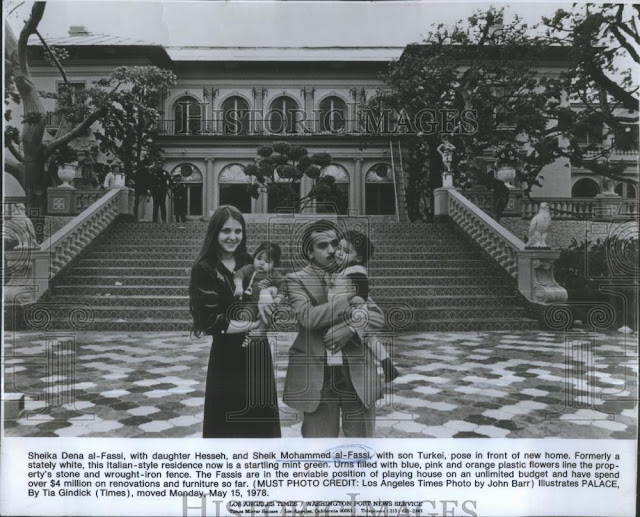 This garish mansion was the infamous ‘Sheik’s House’. Once located at 9561 Sunset Boulevard in Beverly Hills, it had gained international notoriety for its tacky facade. Back in 1978, Saudi Arabian Sheik Mohammad Al-Fassi and his new wife, Sheikha Ibtissm were the owners of this 38 room mansion built in 1917. It was originally a stately Italian residence built by Beverly Hills co-founder, Max Whittier. It was once such a pristine and classy home until the young Sheik had the statues on the front veranda painted in flesh tones that included fuzzy pubic hair on their genitals! When it rained, servants covered the statues with raincoats to preserve their obnoxious paint jobs! Inside he had poster-sized blow-ups made from cheap pulp porn mags hanging in his powder rooms; drugged-out “hippie chicks” with glazed eyes doing “beaver shots”. Also included were giant clam-shell telephones, toilet seats with coins in them, a red bordello pool room which featured a satin ceiling with 1,100 pleats, and a giant round bed that revolved at a touch of a button. Above the bed was a portrait of the Sheik made out of real pearls. The interior of this place was over the top kitsch to say the least. When a security installation worked at the estate, they even found a speakeasy in the basement and escape tunnel that led to the east side of the property.

At one time he invited the neighbors (and my mother) for a tour of the place and she made the front page of the Harold Examiner newspaper the next day. Frank Sinatra did things his way by sending the Sheik a candy clown from Harry Finley the next day. The note said, “You’re excellency, welcome to the neighborhood. I regret that I was not at your party, but then again I was not invited. I hope this candy clown will recompense for your missing bird. Sincerely Frank Sinatra”. 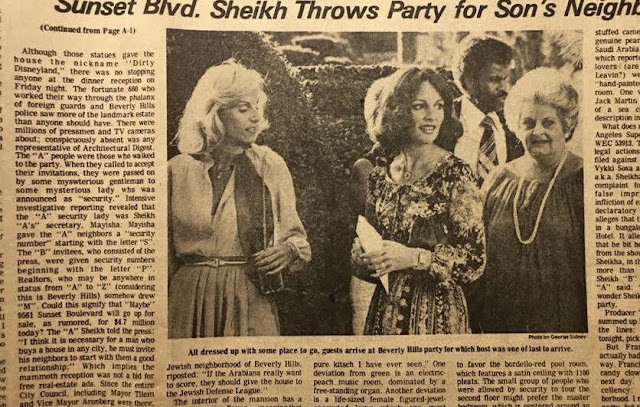 Fassi painted his new gaudy mansion a rotting lime green color and had fake plastic flowers in the most peculiar colors throughout the estate. He added a gold roof, a mosque, a beacon to ward off low-flying planes and a massive black wrought iron gate. He had over one hundred women dressed in black gluing small black stones to the gate for two weeks straight. I remember as a little girl taking one as a souvenir. Neighbors renamed it “Dirty Disneyland.” Tourist hawks and neighbors complained. Although it did come in handy for Steve Martin. The garish home was used as a location for the movie "The Jerk" as Steve Martin’s tacky mansion. Remember the clam shaped bathtub and the 1970s Disco scenes? All filmed right here – no set designer needed! The Sheik was always dressed in Saturday Night Fever style fashions too as he was determined to be trendy. Big colors, polyester and gold chains.

The Jerk filmed at the Sheik's House

At one point Al-Fassi was worth 6 billion dollars, all of which he inherited from being an honorary member of the Saudi Royal family (he wasn’t even a real sheik). There was quite a bit of scandal and speculation when the mansion was torched in 1981. “It was the end of an eyesore”. Some say the neighbors did it. Some think the butler did it. But a majority think the Sheik set the fire himself to keep his ex-wife from inheriting his priceless works of art (including a Matisse which is rumored to have turned up in Peru recently). I’ll never forget the blaze myself since we lived just a block away. I thought the sheik was blowing up the entire block! Well-dressed crowds of gleeful gawkers chanted “Burn, burn, burn.” The fire was labeled suspicious even before investigators discovered that some of the Sheik’s eclectic art collection was missing from the rubble. When it was finally razed in 1985, there was a demolition celebration. Neighbors, politicians, and real estate agents raised their wine glasses as they watched bulldozers take down what was left of it. In the crowd that day was Brett Hodges, the great-grandson of Max Whittier, the original occupant of the 68-year-old estate. Dozens of cameras recorded the scene. Below is rare, archival news footage of the interior and its fateful demise. I discovered this footage back in 1999 inside the KTLA vaults and produced this story as a segment of, “Mysteries & Scandals”.

Today two new massive homes (which look more like embassies) sit on this property. The owners of one of the homes ran out of money and it’s currently sitting empty and unoccupied.

Tony Curtis points out the Sheik's house to Jacklyn Smith. I love how Jacklyn comments on the plastic flowers. 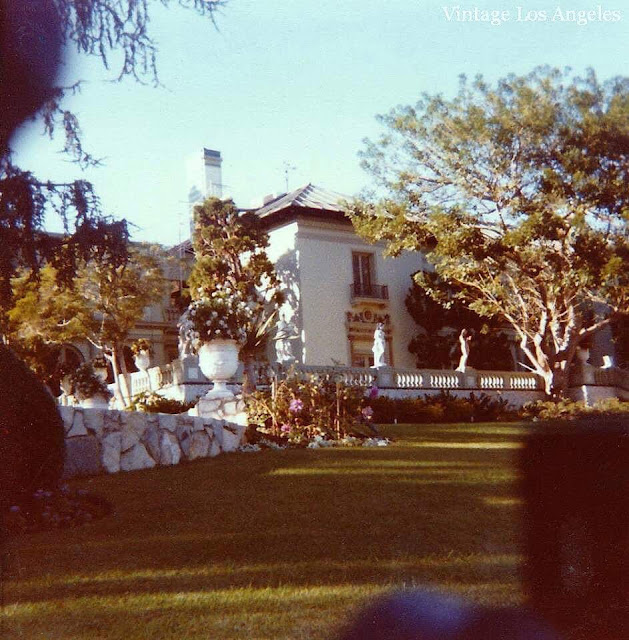 My mother took this photo of the Sheik's house in 1979 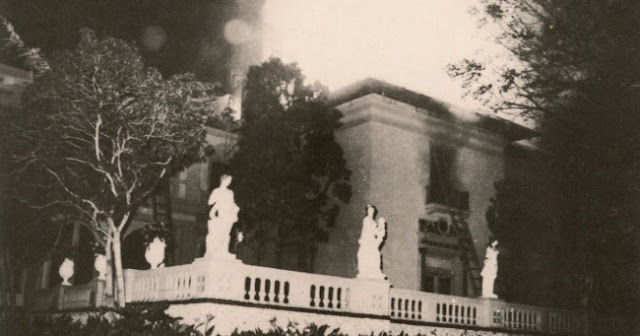 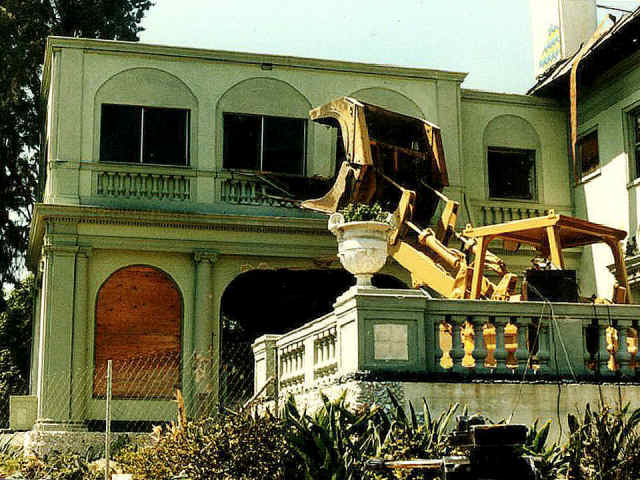 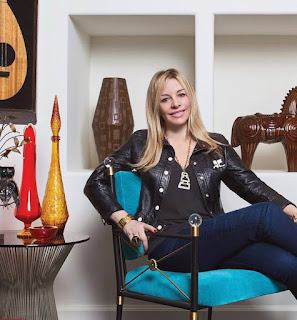