Living Across the Street From Edward G. Robinson I recently found the above vintage Polaroid photo when my mom was packing up our old house. That’s Edward G. Robinson standing in his driveway, directly across the street from where we lived on Rexford Drive in Beverly Hills. My mother snapped this from my upstairs bedroom window shortly after I was born, and it’s the only photo that we have of him. We used to see Mr. Robinson walking his seven dogs with his wife, Jane, while smoking that signature cigar of his. His house was on two lots, and was built by architect Samuel Marx, who had very recently completed his own masterpiece in 1939, The May Co Department Store at Fairfax and Wilshire Blvd. Robinson’s home was a picturesque Tudor style, which the actor contemplated selling in order to build a new home that would better accommodate his growing art collection. In fact, Edward had such an extensive art collection that he commissioned Samuel Marx to build a separate art gallery on the property. It was designed specifically to show off his masterpieces. Marx convinced Robinson to stay in the house, which was then remodeled to display his collection to its fullest effect. They decided to construct a free-standing windowless art gallery. While the exterior was plain with a peaked roof, the gallery’s interior was modern to the core. 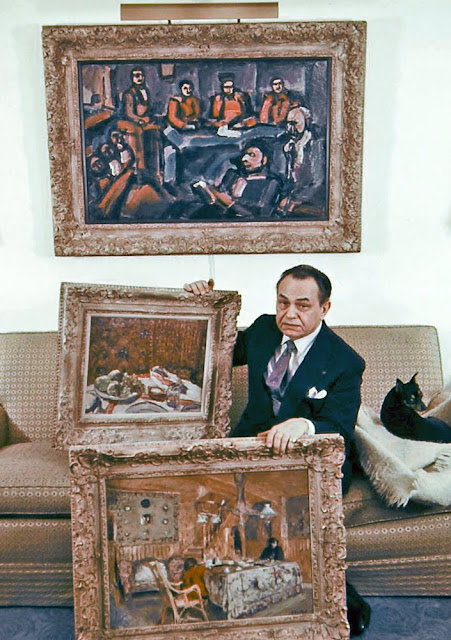 Robinson’s collecting became so widely known that his cameo appearance in a 1967 episode of “Batman” consisted of a scene in which he chatted with the Dynamic Duo about art.

Alas, Edward lost most of his great art collection during divorce proceedings from his first wife. Only a small portion remained of what was once Hollywood’s largest private collection. 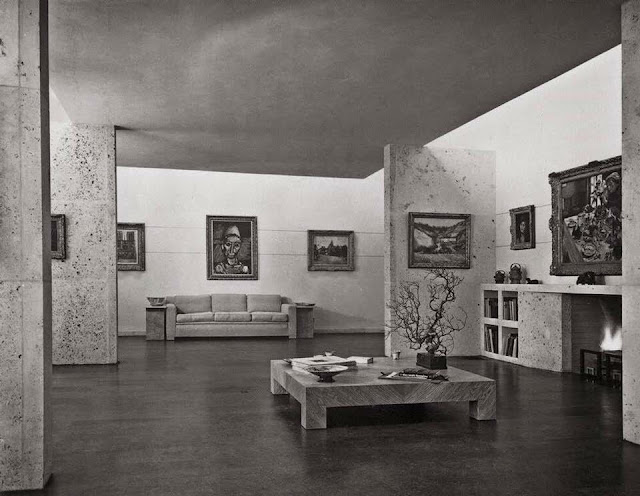 Memories from my mother Judi Martino..."when my husband Al bought the Rexford house E.G. Robinson told him that he had watched our house being built and remodeled (before we bought it) and preceded to tell him that he really liked our kitchen.  It was a St. Charles kitchen which was popular at the time. 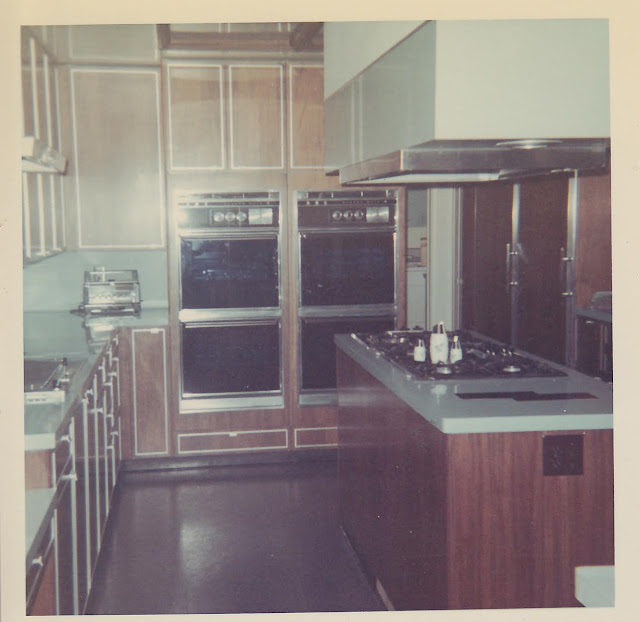 Our St. Charles Kitchen circa 1968

Another memory: my husband had gone to Hal March's funeral with Joey Bishop and after the funeral Joey wanted to stay longer but Al needed to get back home and when Al saw Edward G. leaving Al knocked on his car window and asked for a ride home, E.G. Said "Get in the car KID " ha (Al loved to tell that story using E.G. gruffy voice!)  Unfortunately Mr. Robinson died shortly after moving there, and because of his extensive and valuable art collection there was round the clock security in front and back of his house. They also had a Beverly Hills police offer who lived in their guest house. I believe they did have an art sale in New York, but there were still many more valuable paintings left at their house and in their own art gallery. I will also remember the portrait of Mr. Robinson that hung above the living room fireplace... I've often wondered what happened to it. Jane Robinson became a good friend and it is nice to remember them". 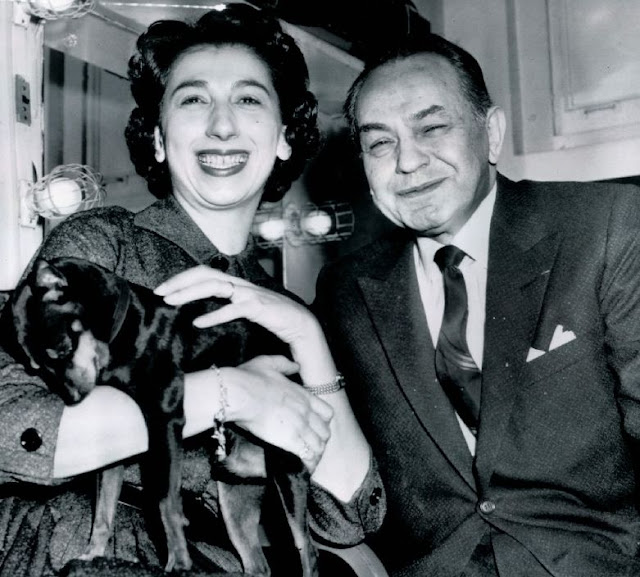 His wife Jane was such a lovable character in her own right. I remember her great laugh. She gave me this photo of one of her poodles to hang in my bedroom in the early 70s. Today it’s one of my most prized possessions. 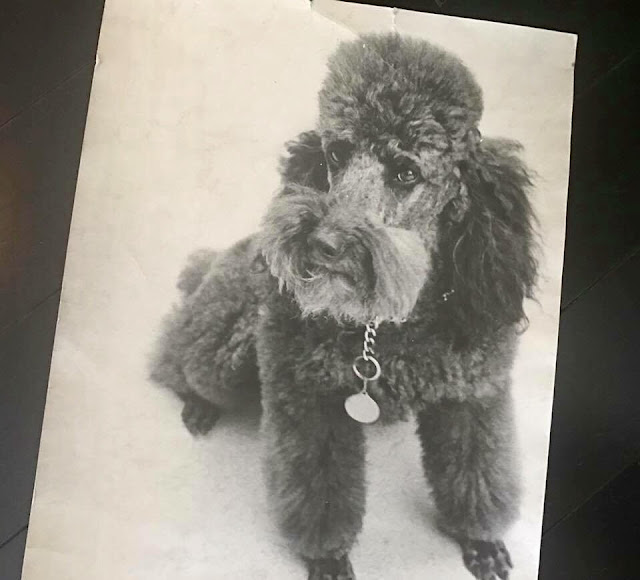 After Edward passed away in 1973, Jane married director George Sydney (Anchors Away, Viva Las Vegas). When Jane died, George married Corinne Entratter, a show girl from Vegas who had once been married to the president of the Sands Hotel. Corrine was another colorful character (but that’s another story entirely). She starred in Blake Edwards’ THE PARTY, and we could hear her quite often across the street stating her opinions very loudly. And speaking of parties, which she had plenty of, she had no problem telling you to leave when she had had enough. Corrine ultimately sold the house after George died, and she moved back to Las Vegas. The new owners who now occupy Edward G. Robinson’s have since severely altered the home and converted the art gallery into a 4 car garage. 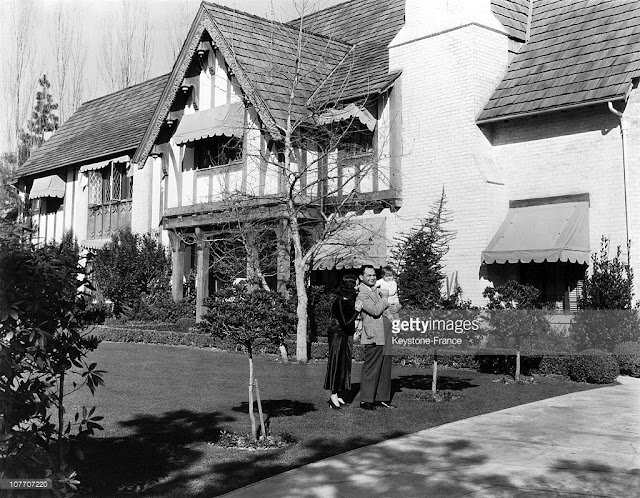 Edward and his wife, Jane in their driveway during the 1950s 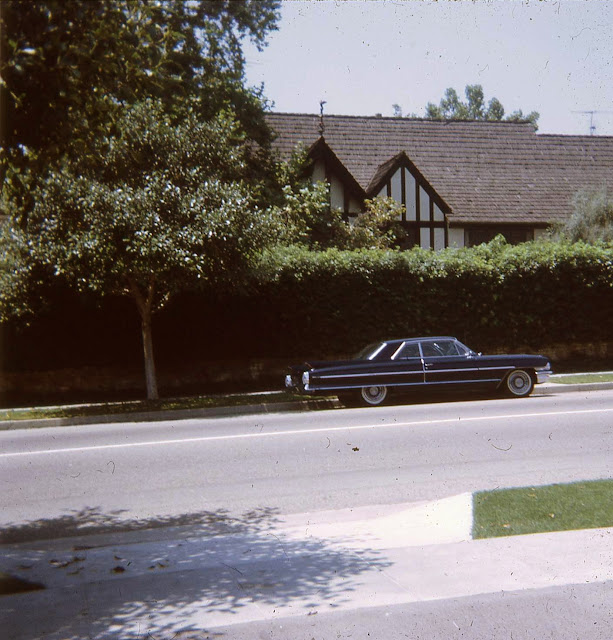 My mother took this photo of Edward's house from our driveway on Rexford Dr. in 1969 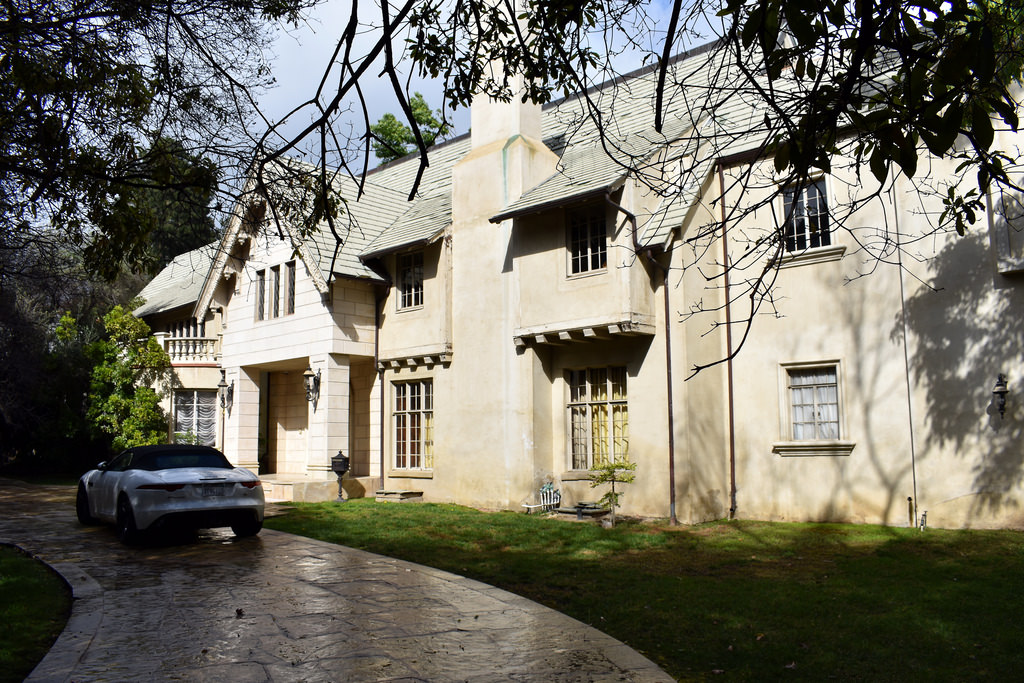 How the house appears today.

There’s not much left from the Edward G Robinson days on Rexford Dr., but I feel so fortunate to have my own masterpiece from their estate: That precious photograph of their beloved poodle. 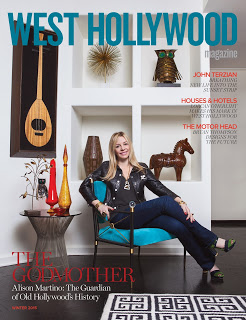